A remarkable mother-of-seven has achieved her lifelong dream of competing on stage in a bodybuilding competition, despite battling terminal breast cancer and undergoing rigorous chemotherapy treatments.

Alisha Salih, 31, was 32 weeks pregnant with her youngest son Isaac when doctors diagnosed her with stage four breast cancer in 2017, telling her she had a maximum of 15 years left to live.

The mother from Sydney made it her mission to check off a host of bucket list experiences, which included marrying her long-time soulmate Metin Salih in front of their family on November 30, 2019.

After a magical wedding day surrounded by her young children and doting friends, Alisha spent 11 gruelling months losing 24 kilos and toning her physique in a bid to enter her first bikini competition.

And last weekend when she finally took the stage at the ICN Muscle and Model Championships in a diamond-encrusted ensemble and earned herself two medals, Alisha smiled knowing she was one step closer to completing her bucket list.

The mother-of-seven was told she had just 15 years to live after being diagnosed with stage four cancer in 2017, while she was 32 weeks pregnant with her youngest son Isaac 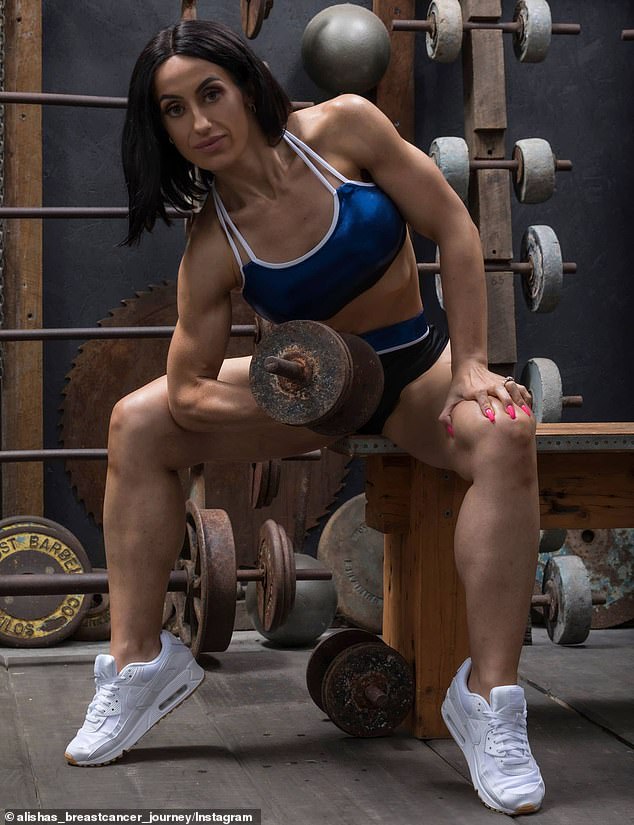 Last weekend when she finally took the stage at the ICN Muscle and Model Championships in a diamond-encrusted ensemble and earned herself two medals, Alisha smiled knowing she was one step closer to completing her bucket list

‘From a goal that started back in 2017, which I postponed due to pregnancy then never thought I would achieve due to my cancer, you never doubted me, you always told me we would make it happen and you never gave up on me,’ she wrote to Adam.

And to Metin she said: ‘My king and our babies, I could never have done this without you, I really couldn’t… you believed in me and kept me going, kept me sane and the amount of meals we missed sharing together… I know it was hard on you’.

Mrs Salih started working on her physique in January and lost a staggering 24 kilos before competing over the weekend.

‘It has been a long prep, due to my health we had to allow for bad days, treatment days, side effects of nausea, fatigue, unbearable muscle and joint pain, the migraines that followed days after treatment, but never have I let any of it be an excuse,’ she earlier shared on Instagram.

‘I use it to drive me, to be a better version of myself despite obstacles life throws at me. Yes I do have stage four incurable cancer but at the moment I am stable and while this is the situation and my body is still capable of training I am going to do what I can.’ 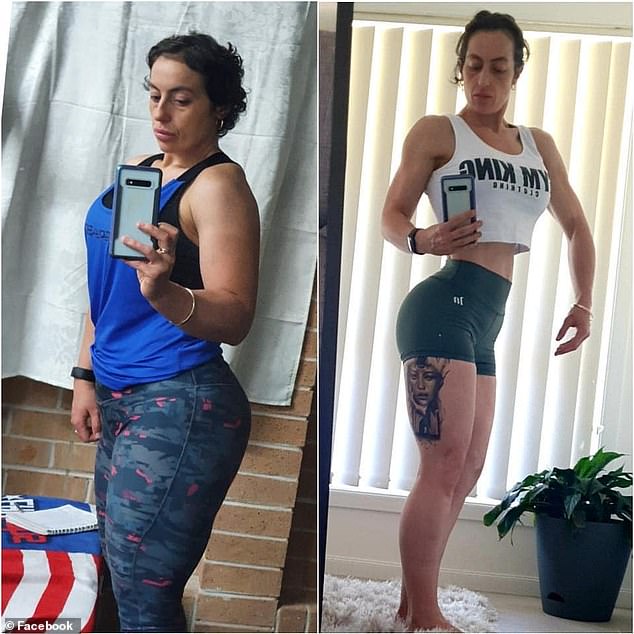 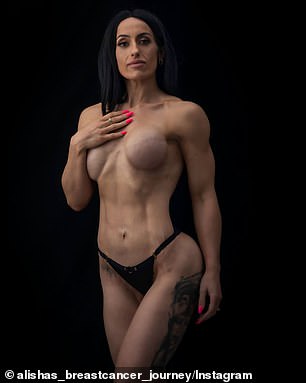 Mrs Salih said for a lot of people struggling with cancer, gaining weight was common

Mrs Salih said for a lot of people struggling with cancer, gaining weight was common.

‘People think we all drop weight because that’s what it shows in movies but it’s quite the opposite for so many of us due to the steroids we need to have alongside our chemotherapy drugs,’ she said.

‘There’s always hope and we can get back to being the way we once were.’

Mrs Salih regularly shared photos of her transformation to her social media accounts, hoping her journey would inspire others battling the same illness.

She is now setting her sights on the Australian National Bodybuilding event in two weeks time.

The mother-of-seven first noticed a lump on her nipple in December 2017, the first sign that something had changed in her body.

It was initially diagnosed as an abscess caused by a bacterial infection – but it grew back so she decided to have a biopsy.

This took place on December 19, 2017, and by December 21, four days before Christmas, Mrs Salih was devastated to be told that the lump she had was breast cancer. 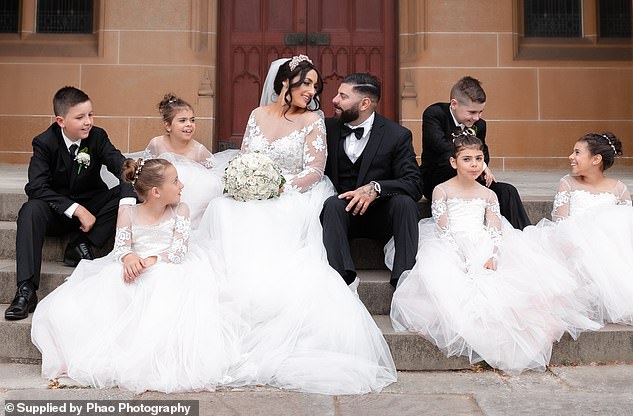 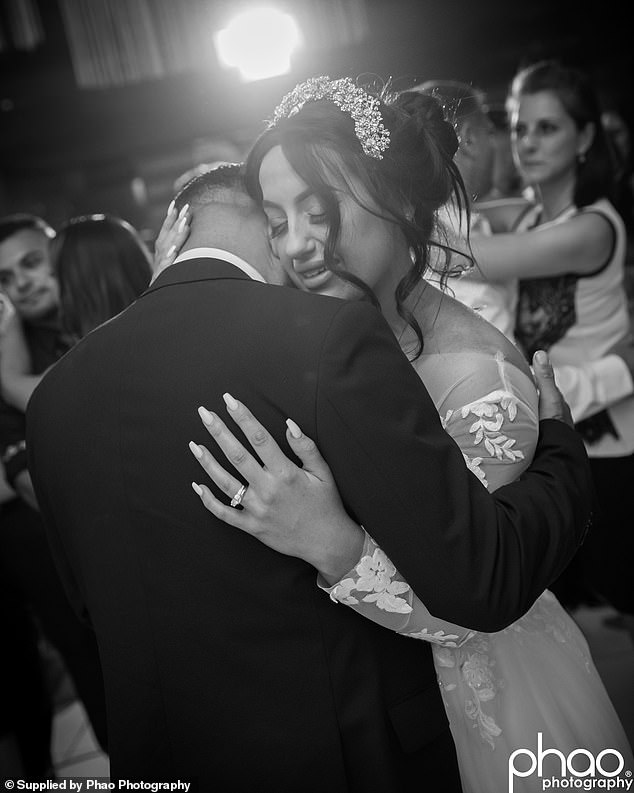 She had to handle this news with a surge of pregnancy hormones and six kids all under the age of 11.

At 33 weeks pregnant, Mrs Salih underwent a mastectomy with every precaution to keep the baby safe after struggling for years to get pregnant.

•Take the family on their first overseas trip (Fiji or Bali)

•Have the opportunity to marry Metin in front of our kids

•Compete in a figure competition

•Learn to speak another language

•Slow dance in the sunset after having a romantic dinner

•Prepare and educate our children on all things in life, protect them, help them through all their problems from friends, to first heartbreaks to getting them ready for formals and high school graduations

She had two weeks to heal before going back under the knife for a caesarean at 35 weeks for the birth of her boy.

Her bucket list, which she created after learning of the fatal diagnosis, is filled with promising adventures, which include riding horses with the children, teaching them life skills and travelling along the Great Ocean Road.

On her 30th birthday last May, her now-husband surprised her with a ring.

She thought she was going out for dinner with Metin and their youngest son Isaac when she was given the surprise of a lifetime.

Metin had led her into a room packed with balloons, candles and roses only to drop down on one knee in front of their seven children, friends and family.

They tied the knot six months later in an intimate ceremony, with their children serving as bridesmaids and groomsmen.

Mrs Salih gifted the four girls a wedding garter each that was identical to her own and the boys cufflinks that read ‘With you always, love you Mum’ to be worn during their own nuptials – in the event she wouldn’t be there to witness them.

Metin was a single dad with three girls while Mrs Salih was a single mum with two boys and one girl before they met.

After being together for four years they decided they wanted a child but it wasn’t an easy task. They were faced with countless attempts to get pregnant and tests indicated infertility.

Although they were heartbroken during this time they carried on and finally, after months of trying, found out Mrs Salih was pregnant with their son Isaac.

Although there have been no substantial changes to her condition, Mrs Salih is determined not to let her cancer take hold of her life.

You can donate to Mrs Salih and her family and help her live out her dreams on her GoFundMe. 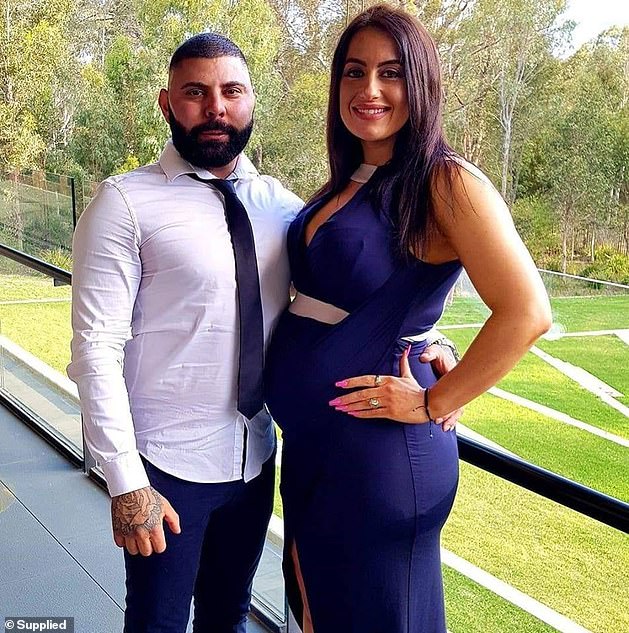 Bride and Groom, Side by Side in a Preschool Photo

Alexandra Levy Olsman and Zachary Isaac Frankel lived across Rittenhouse Square from each other at a young age and went to the same...
Read more
Fashion

L.A. beauty and wellness brands for the self-care we’re all craving right now

Most of us would agree that 2020 was the shortest long year, one in which you probably lost track of your routines. Although...
Read more
Fashion

An obese woman whose weight soared to 340lbs has revealed how she shed 180lbs after flying to Mexico to undergo cheap weight loss...
Read more
Fashion

Getting Rid of Stuff

Welcome. Before weekdays and weekends were indistinguishable, we left the house. Now, we’re inside, many of us, most of time. With the same...
Read more

Rooney ready to ‘roll sleeves up’