A top scientist has called on the NHS to expand its list of Covid-19 symptoms after it emerged almost 200,000 tests for the virus are going un-used every day.

Only those suffering the three key symptoms – a new, continuous cough, high temperature and loss of taste and smell – are eligible for a test, according to the Department of Health.

But Professor Tim Spector, whose team was the driving force behind getting the third symptom formally recognised as a warning sign, said the extra capacity means the list can now be expanded to pick up those in the early stages of infection.

He said the three key symptoms pick up around 85 per cent of cases in those aged 18 to 65 – who are at lower risk from the virus – but ‘they don’t always pick up people early’. They can also struggle to diagnose those who are most at risk.

To help pick up infections in the early stages, he said skipping meals and fatigue should both be added to the list, alongside an unusual skin rash. ‘Those seem to be the most specific,’ he said.

Government figures reveal it had the capacity to complete on average 190,000 tests more a day than were done over the seven-day spell to November 17. And in the week before more than 200,000 were not used.

Professor Spector, and other experts, said it was ‘positive’ that everyone who needed a Covid-19 test could now get one. They added it was hard to match capacity to demand as the number of people needing a test could change ‘very quickly’.

There has been pressure for the Government to start swabbing all NHS employees weekly – but this would require capacity for 1.4million swabs.

Care home workers, people living or working in Liverpool and those going into a hospital can get a Covid-19 test even if they don’t have symptoms. Home carers will also be able to get weekly tests if they have no symptoms from Monday.

The UK has almost 200,000 Covid-19 tests going un-used everyday, according to figures from the Department of Health

Fatigue and a headache are the most common Covid-19 symptoms within the first five days of an infection, scientists have found.

Of 4,182 people who tested positive for Covid-19 and logged their symptoms in the Covid Symptom Study app, 90 per cent suffered fatigue and a headache in the first five days of the disease.

A sore throat was the third most common symptom, experienced by 87 per cent.

Of the officially recognised symptoms a fever was the fourth most common – at 85 per cent within five days.

But experts warned people should expect to be suffering more than one symptom before they seek a Covid-19 test, to prevent the system becoming overloaded.

They also cautioned that there are many more viruses around and many of the symptoms are not specific, meaning many people who suffer them may not actually have Covid-19.

Professor Spector, from King’s College London, and his team have worked to identify the symptoms triggered by a Covid-19 infection with their Covid Symptom Study app.

Users who are unwell are asked to enter their symptoms, and then the results of a Covid-19 test. The symptoms of those who tested positive are then logged, to see whether any early warning signs of the virus can be identified.

It was through this they found loss of taste and smell was a common symptom of the virus, and later drove efforts to get it added to the official symptom list.

More than 4million people use the app, including many in the UK. Their data is used to establish symptoms of Covid-19.

When they compiled the symptoms of 4,182 people who had tested positive for coronavirus, they found that suffering fatigue and a headache were the most common signs within five days of infection – with 90 per cent of those who caught the disease suffering from both.

Professor Spector said of the Covid-19 symptoms list ‘black holes’ for picking up infection: ‘That’s why in the first few days you get the headache, sore throat, you get the fatigue you skip your meals before you get some of these other symptoms.’

In those over 65 – who are at higher risk from the virus – and those below 18, he cautioned that the symptom list should be ‘more flexible’ because these cases don’t tend to show the ‘classic symptoms’.

‘The over 65s for example, most people do not have coughs or shortness of breath so it’s a pretty useless test in that group,’ he said. ‘They tend to have confusion and other problems.’

His team has offered the Department of Health an algorithm for helping to identify those with the virus based on their symptoms, which they said could be used by GPs to help recognise Covid-19 infections in the early stages.

But officials are yet to take up the offer.

He added: ‘Our results do suggest that there are certain groups where those symptoms are not particularly appropriate.’

‘Most other countries have a much more relaxed system. In the US, for example, you have 11 symptoms. I’m not advocating that, but I do think a more intelligent list of the symptoms which varies by age should be employed.’ 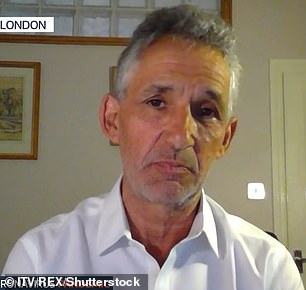 He said that having excess capacity in the system could also be seen as a ‘positive’ given the earlier problems getting tests – with some told to travel hundreds of miles to get swabbed.

The disaster struck when thousands of worried parents and teachers started applying for tests in September, when schools and offices were fully re-opened.

Baroness Dido Harding, in charge of the UK’s testing capacity, was forced to bat off criticism and insisted it is ‘not my job’ to establish whether demand might outstrip supply.

The Government expanded testing capacity to 500,000 swabs-a-day at the start of November, but many of these swabs are continuing to go unused.

Two more machines that will add 600,000 daily swabs to capacity are tipped to arrive in the UK at the start of January, officials said. 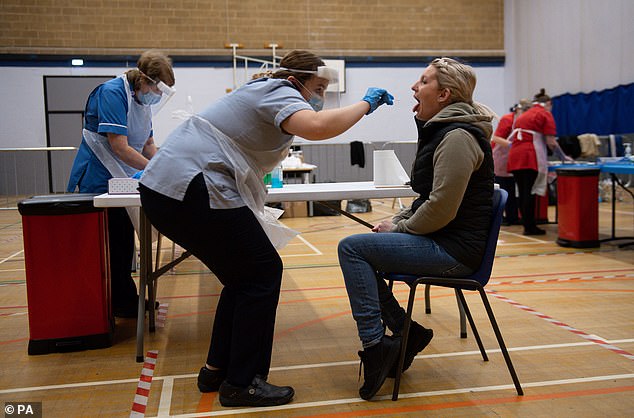 It comes after the Government hurriedly expanded capacity to 500,000 tests a day 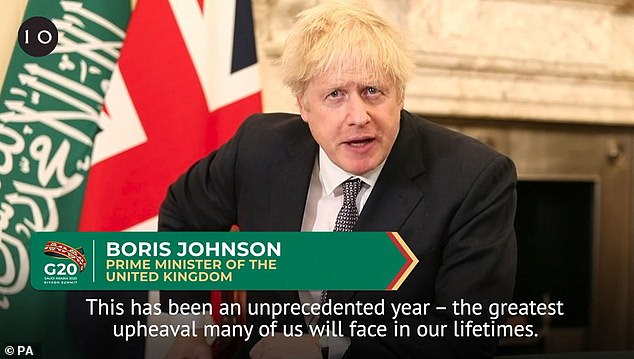 WHAT ARE THE MOST COMMON SYMPTOMS OF CORONAVIRUS?

Below are the most common symptoms of coronavirus as reported by 4,182 people who tested positive for the disease.

They entered their symptoms into the Covid Symptom Study app.

% of individuals ever experiencing symptom

Dr Yoon Loke, professor of medicine at the University of East Anglia, told MailOnline he felt the spare tests should be offered to the contacts of Covid-19 cases – to release those that are not ill from self-isolation.

‘If they are cleared, then they could go back to normal life right away,’ he said.

‘This repeat testing and shortening of quarantine might help improve the dismal statistics showing that perhaps only 10 per cent of people actually fully adhere to isolate themselves.’

He also criticised the Government’s plans to massively expand testing capacity without focusing on turnaround times, saying that although ‘huge capacity is great, you can’t test your way out of a pandemic’.

‘As a doctor, I’d be happy with half the capacity (say 250k) but twice the speed, ideally within 12 hours.

He added: ‘The test is only useful if it can separate out the infected people from the non-infected, so that spread is reduced. Much more effort needs to be put into implementing correct measures after a positive test – probably a lot more carrot is needed rather than so much stick.’

Dr Simon Clarke, an associate professor in cellular biology at the University of Reading, told MailOnline that although there is a lot of left-over capacity he fears an expansion of the list could leave the testing system unable to cope.

‘As winter progresses it can be expected that there will be a significant increase in people with other respiratory tract infections and possibly also Covid-19,’ he said.

‘Many people with other infections will have the same type of symptoms as Covid-19, so will need to be tested and I suspect that we’ll see a lot of that excess capacity get used.

‘It may seem like an unwarranted expense now, but it could easily be called into action very quickly over the winter.’

A Department of Health and Social Care spokesperson said: ‘NHS Test and Trace has capacity in place to respond to increases in demand, with capacity also used to expand our testing offer further.

‘Demand for testing will vary and this should give people confidence that if they have symptoms and they need a test, they can get one.’

‘Team Harry will prevail… it’s by no means the end’

Harry Dunn's parents have lost their High Court battle against the Foreign Office over whether their son's alleged killer had diplomatic immunity.But his...
Read more
Trending News

Benefits scams worth £1bn foiled by officials during lockdown

Hundreds of identities were stolen before the fraud was spotted, officials say.Source by
Read more
Trending News

‘We can convince Messi to stay’

Rabb: ‘We continue to offer the Dunn family support’

Harry Dunn's parents have lost their High Court battle against the Foreign Office over whether their son's alleged killer had diplomatic immunity.In response,...
Read more

Cornwall Air 999: Woman screams after having her dislocated ankle ‘clunked’ back into place

Gruesome footage reveals the moment a woman screamed after having her dislocated ankle 'clunked' back into place on Cornwall Air 999 In tonight's episode...
Read more

Become an AD PRO MemberBuy now for unlimited access and all of the benefits that only members get to experience.ArrowWith a plethora of...
Read more

Cornwall Air 999: Woman screams after having her dislocated ankle ‘clunked’...