Argentina’s newspapers and media outlets were united in their tributes to Diego Maradona this morning after the football icon’s sudden and tragic death at 60.

Clarin, Argentina’s best-selling newspaper, led with the famous picture of Maradona holding the Jules Rimet trophy aloft after the 1986 World Cup final with the headline: ‘There won’t be another like him’.

They had been the first to report Maradona’s death from heart failure on Wednesday afternoon UK time, following which outlets from across the world picked it up.

‘And one day it happened,’ read their obituary. ‘The sentence that was written various times but which destiny dribbled past is now part of a sad reality: Diego Armando Maradona is dead.’

But, said the paper: ‘Maradona is in the present, even though you have to write about those who have died in the past tense.’

The obituary finished with the unique interview Maradona gave himself on an Argentine TV show in 2005 when he asked himself what he’d say at his funeral.

‘Thanks for having played football, because it’s the sport that gave me the most happiness, the most freedom, it’s like touching the sky with your hands. 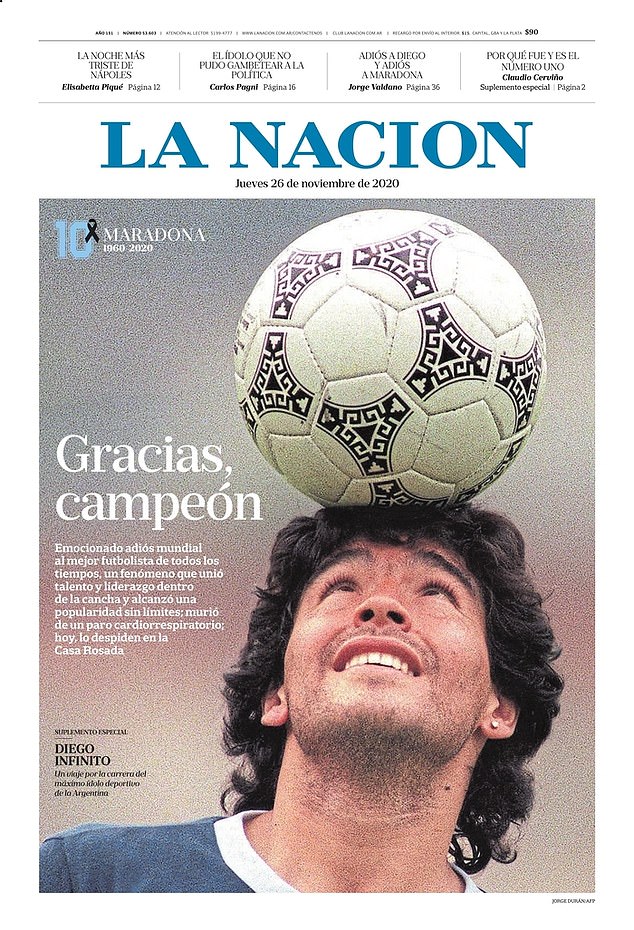 ‘An emotional goodbye across the world for a footballer for all time,’ it read. ‘A phenomenon who combined talent and leadership on the pitch and reached unlimited popularity.’

It also carried news of Maradona’s farewell at the presidential palace, the Casa Rosada, where his body will lie in state for three days starting on Thursday – only the second non-president to receive the honour after Formula 1 champion Juan Manuel Fangio.

Their obituary described Maradona’s death as ‘the news that left the country in total shock’.

‘Well, now I can retire,’ he says, leaving a throne with Maradona’s famous 10 on it vacant for El Diego. 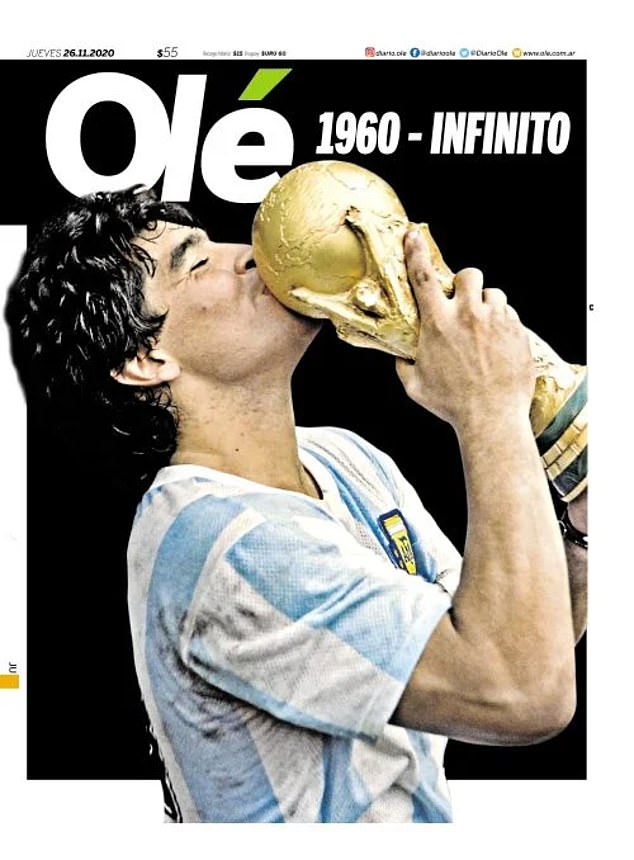 While both newspapers carried Maradona’s date of birth and death on their front page, Argentina’s leading sports newspaper Ole went with ‘1960 – Infinity’ instead alongside El Diez kissing the World Cup trophy.

It was no surprise to see so many papers leading off the World Cup triumph, Maradona’s finest moment for Argentina that cemented him in the hearts of the entire nation. 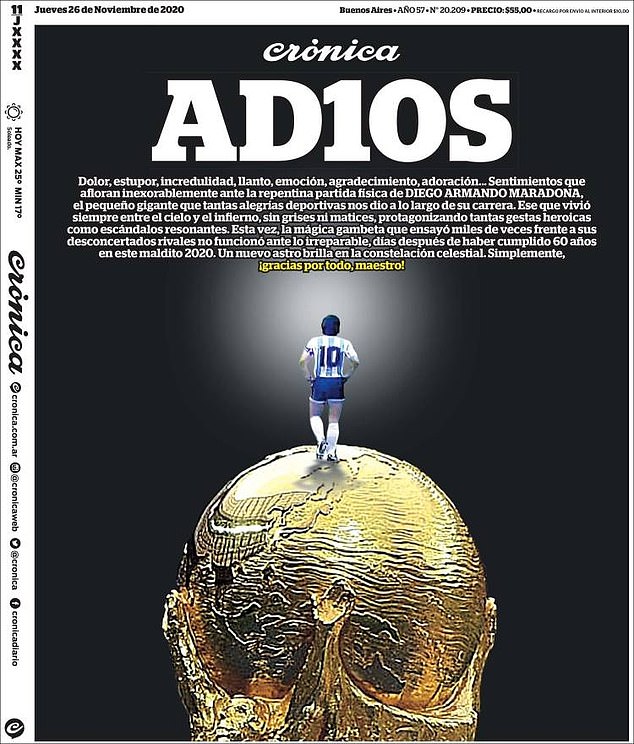 Cronica turned it round, however, with their front page showing Maradona standing on the Jules Rimet trophy and the headline AD10S – playing on the shirt number he made his own in Mexico.

They described him as ‘the small giant who gave us so much sporting joy over the course of his career’ who ‘always lived between heaven and hell, without shades of grey or nuances’. 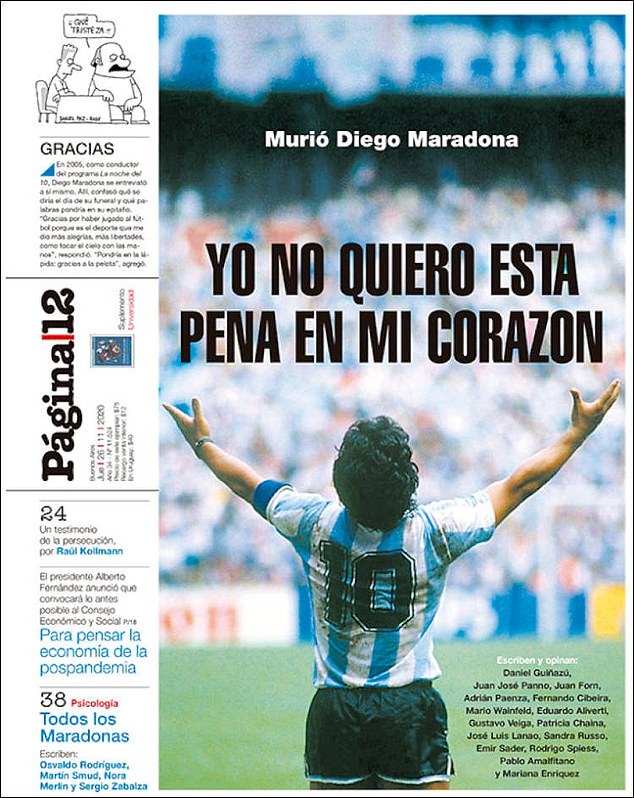 Pagina 12 went with an even more emotive cover which summed up the general feeling in Argentina, overlaying an image of Maradona in the blue-and-white of Argentina looking up to the sky with the headline ‘I don’t want this sorrow in my heart’.

As their lead writer put it: ‘He is not in History, he made History. He wrote it with a ball stuck to his left foot.

‘Few images sum up Argentinidad like the one of Diego lifting the World Cup in 1986. Few represent so well what we wanted to be and what we once were.’

Some presenters on Argentina’s constantly rolling sports channels were brought to tears as they announced the news with the sombre headline ‘Diego Armando Maradona died’.

On TyC Sports, respected pundit Horacio Pagani struggled to hold back tears in the immediate aftermath of the news.

‘Football has died and I’m feeling incredibly sad. Diego played as if he’d never die. For 20 years he’d been playing on the edge, but he really seemed to be immortal.

‘He was going in circles for 20 years and he always came out in front, just like he did with the ball.

‘It’s exactly as if football has died,’ he concluded as he burst into tears. 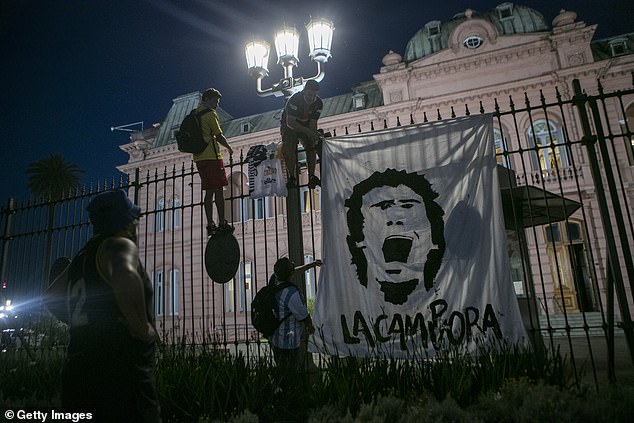 ‘Each time he went out onto the pitch it was to give everything for us.’ 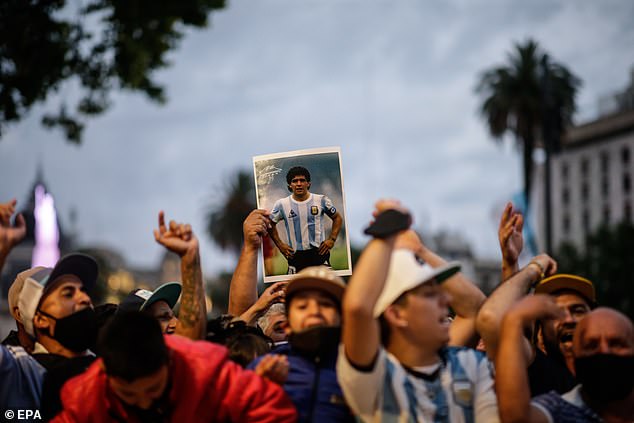 Perhaps the most emotional moment came with the revelation that the 1986 World Cup-winning manager Carlos Bilardo’s television had been switched off so as not to upset him.

‘They turned off Carlos’s TV, they told him that the cable broke,’ his brother Jorge told Radio Provincia. ‘For Carlos, Diego was the son he never had.’ 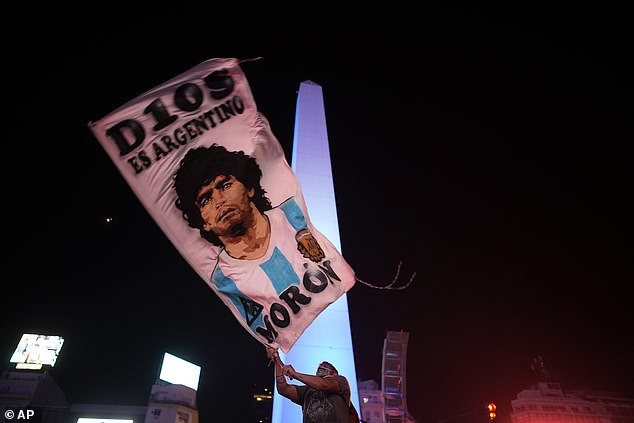 Various channels carried images of the tributes to Maradona across Buenos Aires, from the Obelisco monument in the centre of town to the Bombonera stadium where he made his name with Boca Juniors, from outside the house where he died in Tigre to the slum where he grew up in Villa Fiorito.

Thousands of fans gathered throughout the night to see Maradona lie in state at the Casa Rosada, with members of Boca’s hardcore group of fans La Doce banging drums and playing trumpets in homage to their hero.

Inside the presidential palace, Maradona’s coffin was draped in a Boca Juniors shirt, the Argentine flag – and, of course, the number 10 shirt in which El Diez gave Argentina their most significant victory.

Megan Rapinoe and Carli Lloyd are back and feeling refreshed

Megan Rapinoe and Carli Lloyd have a lot in common.Both are two-time World Cup champions and Olympic gold medalists.Each has led a World...
Read more
Sports

Liverpool have 'lost their spark', says Roy Keane after they fail...
Read more

‘Rudy wants $2m to get you a pardon.’ Report reveals was said during boozey meeting at Trump hotel