Dr. Harold N. Bornstein, Donald Trump’s personal physician who once famously declared him to be ‘the healthiest individual ever elected to the presidency’ only to later claim he was coerced into making the claim, died on Friday, it has been revealed.

Bornstein, the Manhattan-based doctor, was 73 years of age at the time of his death, which was revealed in a paid notice published in The New York Times on Thursday.

No cause of death was given. There is also no word as to where he died.

DailyMail.com has reached out to the White House for comment on Bornstein’s passing.

The public learned of Bornstein’s death through an obituary that appeared in the Times’ Legacy section.

‘Dr. Bornstein devoted his life to the practice of medicine, which he regarded as a sacred privilege,’ the obituary read.

Dr. Harold N. Bornstein, Donald Trump’s personal physician who once famously declared him to be ‘the healthiest individual ever elected to the presidency,’ died this past Friday, it has been revealed. He is seen above at his Manhattan office in this undated file photo 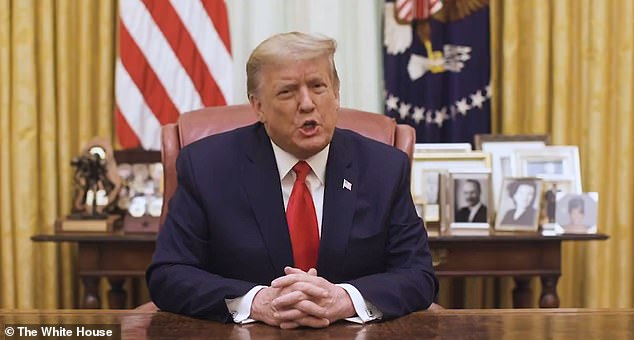 In 2018, Bornstein said that Trump sent his bodyguard to raid his office and retrieve the president’s medical records. Trump is seen above during White House address on Wednesday 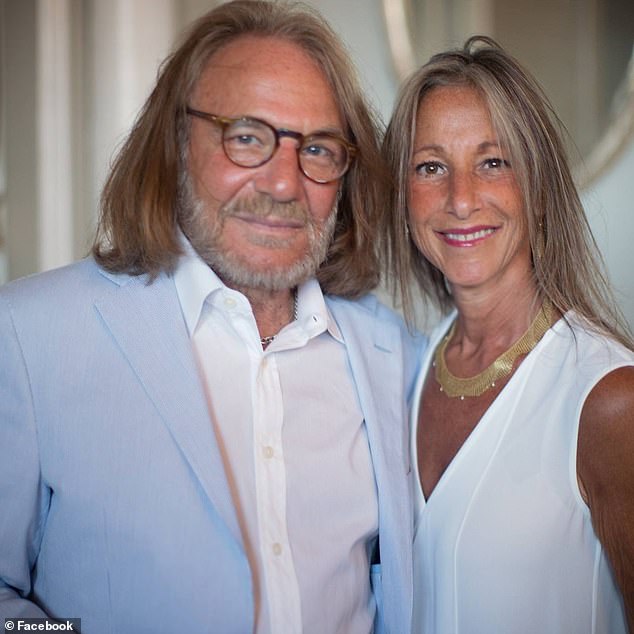 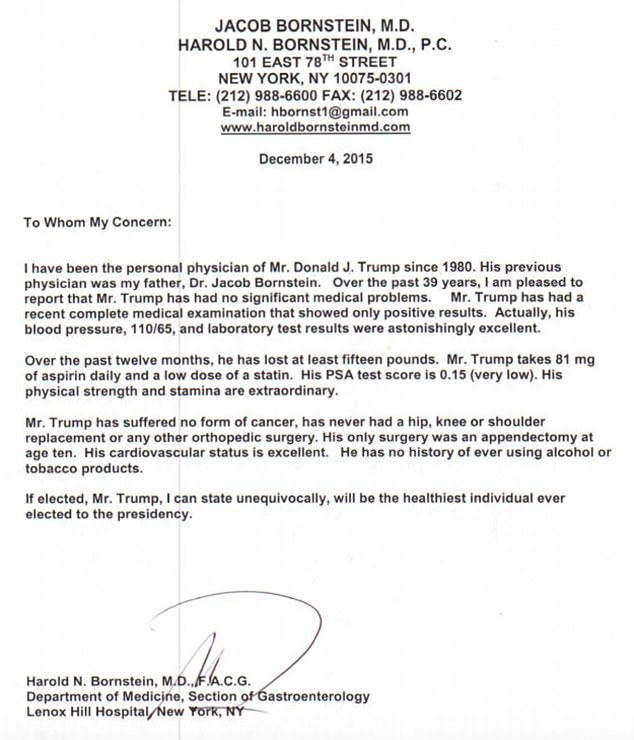 Bornstein gained national fame in 2015, when Trump launched his successful bid for the Republican nomination that eventually catapulted him to the White House. The physician wrote a letter that year which concluded that Trump’s lab tests were ‘astonishingly excellent’ and that he had ‘lost 15 pounds’ in the prior 12 months

‘His devotion to his patients was unparalleled and he continued a traditional style of personal medicine, making house calls and holding the hands of those in need until the end.

‘As a lifelong learner, he often spent nights under a lamp reading and annotating Italian language literature.’

Bornstein gained national fame in 2015, when Trump launched his successful bid for the Republican nomination that eventually catapulted him to the White House.

With his long flowing hair and large glasses, Bornstein became a colorful character in Trump’s unlikely 2016 campaign for the presidency.

In a letter released in December 2015, Bornstein wrote that Trump would ‘unequivocally’ be the healthiest president in history and deemed the celebrity businessman’s condition ‘astonishingly excellent.’

He later said he wrote the note in five minutes while a limo sent by the candidate waited outside his office.

In media interviews, Bornstein would later claim that he was forced to give Trump the glowing bill of health. 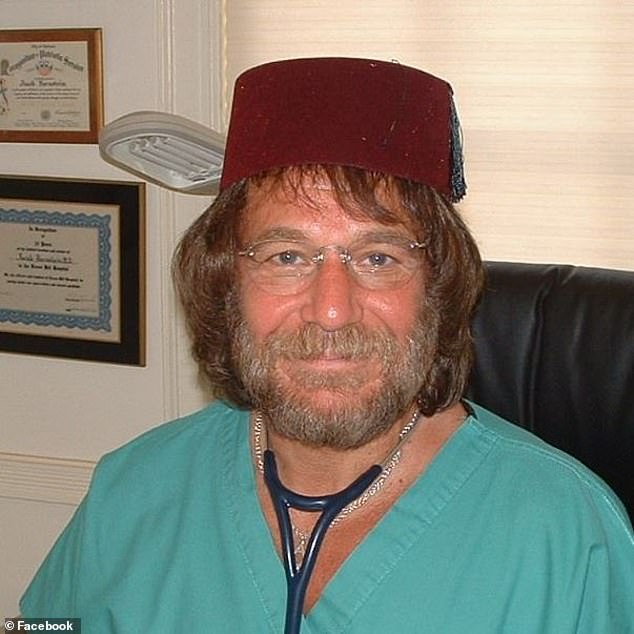 ‘Dr. Bornstein devoted his life to the practice of medicine, which he regarded as a sacred privilege,’ the obituary in The New York Times read

Bornstein described feeling ‘like the slave that carried out, you know, the orders that came from Fifth Avenue.’

‘He dictated that whole letter. I didn’t write that letter. I just made it up as I went along,’ he told CNN outside his Park Avenue office two years ago.

He didn’t dispute the president’s clean bill of health, but compared Trump’s subterfuge to the Oscar-nominated crime drama ‘Fargo,’ because ‘it takes the truth and moves it in a different direction.’

Bornstein recalled being in the car with his wife in December 2015 while rehearsing the letter over with Trump. He said he told him what was appropriate and inappropriate to say publicly.

The doctor signed the letter attesting that ‘if elected, Mr. Trump, I can state unequivocally, will be the healthiest individual ever elected to the presidency.’

But he told NBC that line was tongue-in-cheek – ‘just black humor.’

Bornstein also issued a second letter prior to the November 2016 election, attesting that Trump was in ‘excellent physical health.’

The future president’s blood pressure and cholesterol measurements were noted as healthy, despite using a cholesterol-lowering statin medicine.

Also listed to be normal, his EKG, echocardiogram, chest X-ray and blood sugar. 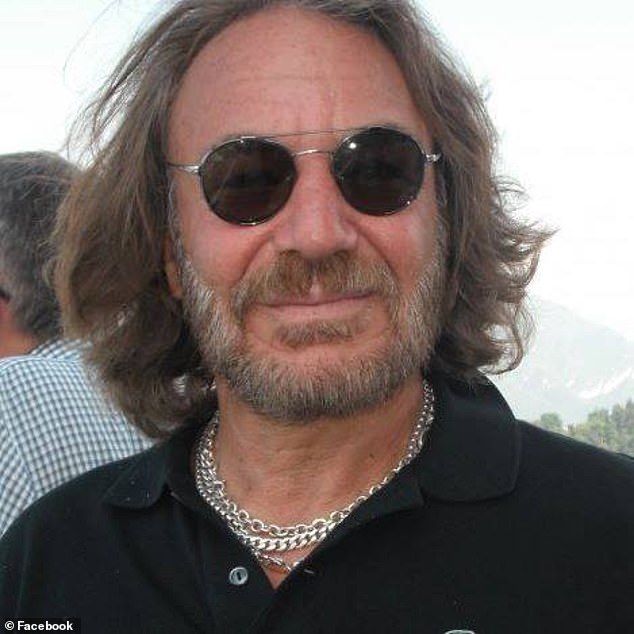 Weighing in then at 236 pounds, the six-foot-three Trump’s body mass index, or BMI, was 29.5, meaning he was overweight.

During Trump’s term, the president’s health was an often-discussed subject, with many critics reacting with skepticism to claims by White House doctors that he was in excellent health.

In 2018, Bornstein told NBC News that Keith Schiller, the president’s longtime bodyguard and former director of Oval Office operations, showed up at his office in February 2017 along with two other men to collect Trump’s medical records.

‘As is standard operating procedure for a new president, the White House Medical Unit took possession of the president’s medical records,’ she told reporters at a White House briefing in May 2018.

As for Bornstein’s description that it had had the feel of a raid, she said, ‘No, that is not my understanding.’

Bornstein told NBC that Schiller and another ‘large man’ were in his office about 30 minutes and ‘created a lot of chaos.’

The doctor said the two men were joined by Alan Garten, the chief legal officer for the Trump Organization.

The incident at Bornstein’s office came two days after the doctor told The New York Times that Trump takes Propecia, a drug for enlarged prostates that is often prescribed to stimulate hair growth in men.

Bornstein told the Times that he prescribed Trump drugs for rosacea and cholesterol as well.

Bornstein told NBC that Trump’s longtime personal secretary called him after the story ran and said: ‘So you wanted to be the White House doctor? Forget it, you’re out.’

Bornstein said he wasn’t given a form authorizing him to release Trump’s records, but said Schiller and Garten took the originals and copies of Trump’s charts and lab reports, including records filed under pseudonyms the office used.

Questions were raised about the legality of the seizure.

Patients have a right to a copy of their medical records but the original physical record belongs to the doctor, said Dr. Matthew Wynia, director of the Center for Bioethics and Humanities at the University of Colorado.

A man has been run over by a police cruiser that plowed through a crowd of people as they watched street racers do...
Read more
US

Second Gentleman Douglas Emhoff has said that it was love at first sight when he met Vice President Kamala Harris, and predicts that...
Read more
US

Rudy Giuliani has admitted that his associate emailed Trump campaign officials requesting he be paid $20,000 per day to dispute the results of...
Read more
US

Dr. Anthony Fauci says that he was muzzled by the Trump administration which ‘blocked’ him from appearing on the left-leaning MSNBC cable news...
Read more