By Paul Newman for the Daily Mail

Jonny Bairstow is out of position in this star-studded Twenty20 batting line-up at No4 but how he rose to yet another new challenge here with a quite brilliant display of hitting to blast England to an opening victory of their South African tour.

England are determined to give Jos Buttler, the man who took Bairstow’s Test place, a run at the top of the order while Dawid Malan has made himself undroppable at three by becoming the No1 ranked short-form batsman in the world.

That meant Bairstow had to drop to a position where he has least experience in the top six for this first of three Twenty20 internationals but that did not stop him rescuing England when it seemed South Africa would pull off a surprise win at an empty Newlands. 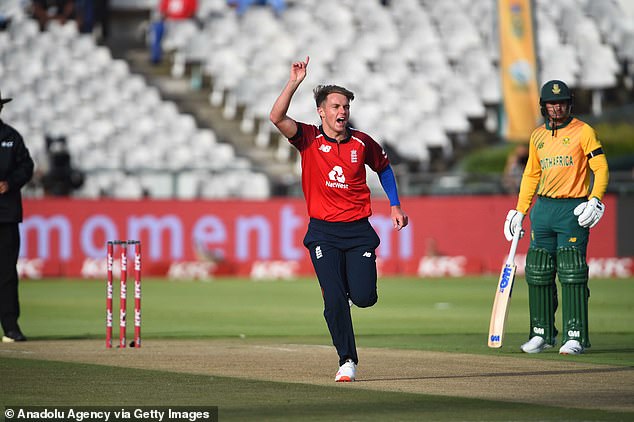 South Africa’s preparation for this series has been beset by problems, from the chaos of their administration to the turmoil of having two players test positive for Covid-19 and the controversy of them refusing to take the knee in support of Black Lives Matter.

But they looked like they would make Eoin Morgan pay for choosing to chase on a slow, inconsistent pitch and leaving out his second spinner in Moeen Ali by posting a highly competitive 179 for six and then quickly knocking over England’s top three.

This extraordinary England side are, however, happy to chase anything and thanks to Bairstow’s unbeaten 86 off 48 balls they won this one with relative ease and four balls to spare. 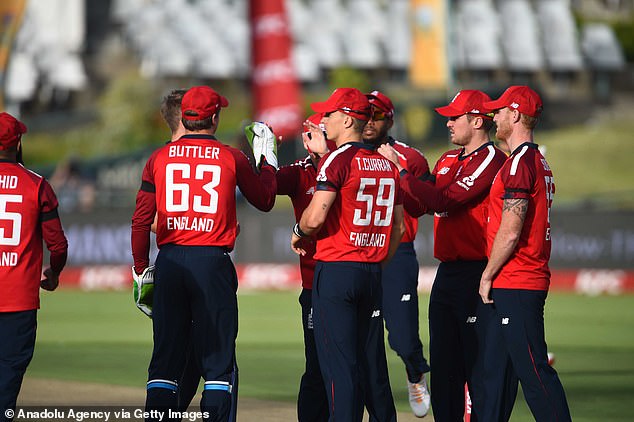 Jos Buttler and Co. celebrate after amassing a strong score in Cape Town

England had preferred the Curran brothers to Moeen and Mark Wood as captain Morgan continues his quest to settle on his best Twenty20 side with just under a year to go until the next World Cup and saw the moves half justified.

Sam Curran produced his best performance in a Twenty20 international to take three for 28 off his four overs while his elder brother Tom had a njght to forget, returning his most expensive short form analysis and taking his sole wicket with his final ball.

South Africa made a stuttering start as perhaps befitted a team who had not played a game together since the start of the Covid crisis in March but they hit their stride through the figures of captains past and present in Faf du Plessis and Quinton de Kock.

Once Temba Bavuma had fallen to the last ball of the first over trying to ramp Sam Curran the experienced pair took over for South Africa, De Kock pulling Jofra Archer for a big six in an over that cost the recent IPL’s MVP 14.

But it was Du Plessis who really began propelling South Africa to an impressive total by hitting Tom Curran for 16 off three balls in an over that cost 24 and set the tone for the elder brother’s chastening night.

It took an excellent catch in the deep from England’s best fielder in Chris Jordan to see the back of Du Plessis, who proved the most significant of the younger Curran’s three victims after smashing 58 off 40 balls. 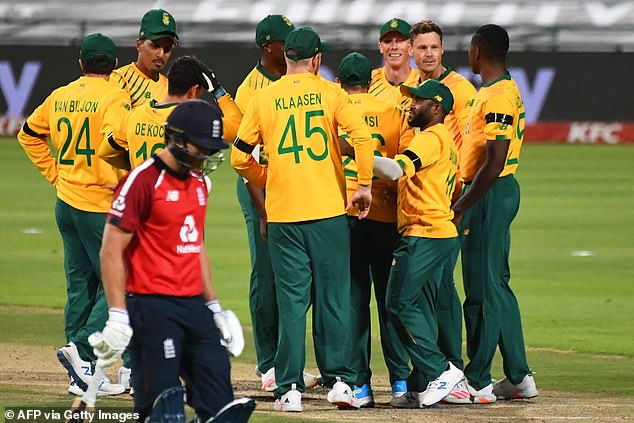 But the depth in England’s white-ball batting is, quite frankly, ridiculous and the comeback was launched with echoes of the 2016 Cape Town Test by Bairstow and Ben Stokes.

The pair, who put on a record-breaking 399 here almost five years ago, this time added 83 off 67 balls, Stokes marking his return to the England side after compassionate leave in the summer with 37 off 27 balls, three of them being struck over the boundary Stokes, who surprisingly was unused with the ball, could not believe it when he hit the left-arm wrist spin of Tabraiz Shamsi straight to Linde at long on.

But the momentum was with England for the first time in the match and when they are in that kind of mood no chase seems impossible.

The crunch came when Beuran Hendricks lost the plot with the game in the balance, conceding 28 off the 17thover and bowling three wides, one of them flying to the boundary.

That ended any doubt England had, Bairstow completing the job by hitting the first two balls of the last over from Lungi Ngidi for four and six.

‘I thought we were average apart from two or three guys but Jonny had an unbelievable day out on a two-paced wicket,’ said Morgan.. ‘And to win when we haven’t played our best cricket is very pleasing.’

Dennis, a senior at UCLA, was competing against Arizona State when she executed the routine celebrating Black culture. It featured Kendrick Lamar, Beyonce,...
Read more
Sports

Frank Lampard 'clashed' with Chelsea chief Marina Granovskaia over how to...
Read more

Here are 10 Oscar-contending song tracks. Why not make them your playlist?

Here are 10 Oscar-contending song tracks. Why not make them your...