Scientists believe they may have created the first drug that reverses age-related cognitive decline in just days.

It works by rebooting the protein production machinery of the cells in our brains after it gets smothered by a stress response from our body.

The team, from the University of California, San Francisco (UCSF) says the findings shed fresh light on age-related brain diseases and could lead to a treatment that stops the progression of symptoms.

An integrated stress response (ISR) can stop the protein production machine of cells if it notices something is wrong, but can also damage cells in our brains if left ‘on’ (file image)

In the past, the team had been studying integrated stress response (ISR), which can be triggered within a cell due to certain conditions.

For example, if a cell has a viral infection or a cancer-promoting gene mutation, ISR detects problems with protein production.

It stops the cell’s protein production machine so it can get rid of the compromised cells.

However, if it remains in the ‘on position’ in the brain, we can start losing our ability to perform day-to-day activities.

The drug, which inhibits this response, is called ISRIB, which stands for ISR InhiBitor, and was discovered in the team’s lab in 2013.

It reboots the cell’s protein-synthesis machinery after being halted by a stress response.

Previous animal studies have found that a brief treatment of ISRIB can restore normal brain function in mice with brain injuries practically overnight. 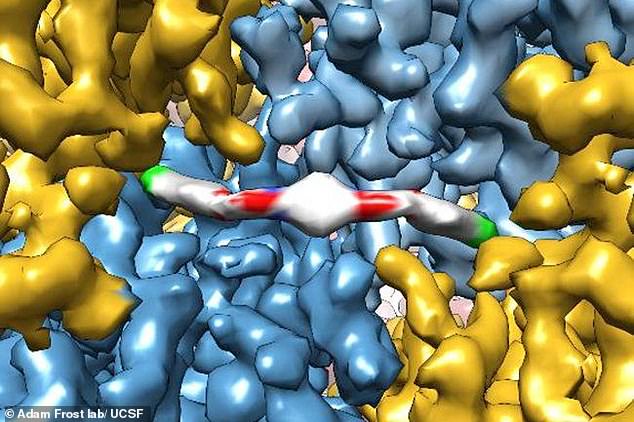 HOW TO DETECT ALZHEIMER’S

Alzheimer’s disease is a progressive brain disorder that slowly destroys memory, thinking skills and the ability to perform simple tasks.

It is the cause of 60 percent to 70 percent of cases of dementia.

The majority of people with Alzheimer’s are age 65 and older.

It is unknown what causes Alzheimer’s. Those who have the APOE gene are more likely to develop late-onset Alzheimer’s.

There is no known cure for Alzheimer’s, but experts suggest physical exercise, social interaction and adding brain boosting omega-3 fats to your diet to prevent or slowdown the onset of symptoms.

‘We’ve seen how ISRIB restores cognition in animals with traumatic brain injury, which in many ways is like a sped-up version of age-related cognitive decline,’ said Dr Suzanna Rossi, a professor in the departments of Neurological Surgery and of Physical Therapy and Rehabilitation Science at UCSF.

‘It may seem like a crazy idea, but asking whether the drug could reverse symptoms of aging itself was just a logical next step.’

For the new study, published in the journal eLife, the team split mice into three groups: younger mice, older mice who received small daily doses for three days and older mice that didn’t receive the drug

Next, the rodents were trained to escape from a watery maze by finding a hidden platform.

Older mice given ISRIB were able to accomplish the task much better than older mice that weren’t given the compound and as well as the younger mice did.

To test if the cognitive rejuvenation lasted, they tested the mice again several weeks after the drug treatment to see if they could find their way out of a maze with an exit that changed every day.

The mice given the ISRIB treatment three weeks prior still performed as well as the younger mice while the untreated mice struggled to exit the maze.

Researchers looked at the anatomy of cells in the hippocampus, the part of the brain associated with learning and memory, to determine how ISRIB improves brain function.

They found that literally overnight the electrical activity between neurons was more vigorous and cells were better able to form stable connections with other cells.

Additionally, they found it helped improve the conduction of the immune system’s T cells, which are affected by age-related inflammation.

The team believes an ISR-resetting agent like ISRIB could treat a number of diseases including dementia, Alzheimer’s, Parkinson’s and even Amyotrophic Lateral Sclerosis (ALS).

‘The data suggest that the aged brain has not permanently lost essential cognitive capacities, as was commonly assumed, but rather that these cognitive resources are still there but have been somehow blocked, trapped by a vicious cycle of cellular stress,’ said Dr Peter Walter, a professor in the UCSF Department of Biochemistry and Biophysics.

‘Our work with ISRIB demonstrates a way to break that cycle and restore cognitive abilities that had become walled off over time.’

The race against the virus that causes COVID-19 has taken a new turn: Mutations are rapidly popping up, and the longer it takes...
Read more
Health

Dozens of cases of the South African coronavirus variant have already been spotted in Britain, it was revealed today.The Covid-19 Genomics Consortium UK...
Read more
Health

Elderly Britons may be missing appointments for their coronavirus vaccines because GPs are sending them invites by text, doctors fear.Some over-80s who are...
Read more

House decorated almost entirely in shades of GREY on sale for £850,000

Airbnb reveals the top 10 places Britons in lockdown 3.0 are dreaming of visiting

Zoom fail! Professor just back from maternity leave is interrupted by her baby EIGHT times

Idaho doctor will trial after admitting he impregnated patients with his...

House decorated almost entirely in shades of GREY on sale for...