By Chloe Morgan For Mailonline

A mother has questioned whether she’s in the wrong after a stranger left a ‘passive aggressive note’ on her windscreen when she parked legally in a residential bay for two hours – and it even came in a yellow fine envelope.

Taking to Mumsnet, the anonymous woman, believed to be from the UK, posted a photograph of the note which slammed her for parking in a residential bay.

It read: ‘If you must insist on parking on a residents bay, please be considerate of families with children who may need to park outside their own house!

‘Plenty of space further up the road…’

An anonymous woman, believed to be from the UK, has taken to Mumsnet to share the ‘passive aggressive note’ she found stuck to her windscreen from a stranger – and it even came complete with a yellow fine bag (pictured)

The confused mother explained: ‘I’ve just returned to my car (parked completely legally in a bay on the road, within the lines and well within the specified 2-hour time limit) to a beautifully-written passive aggressive note – A* for effort.

‘Whoever stuck it on my dashboard actually put it inside one of those yellow PCN envelopes, folded up so it looked like a parking ticket.’

She added: ‘In all seriousness, there wasn’t “plenty of space further up the road” when I arrived, and the spaces aren’t just for residents.

‘I’ve lived in a house like this before so I get it, and yes it’s annoying, but not really much you can do about it apart from say ‘ffs’ and go about your day. 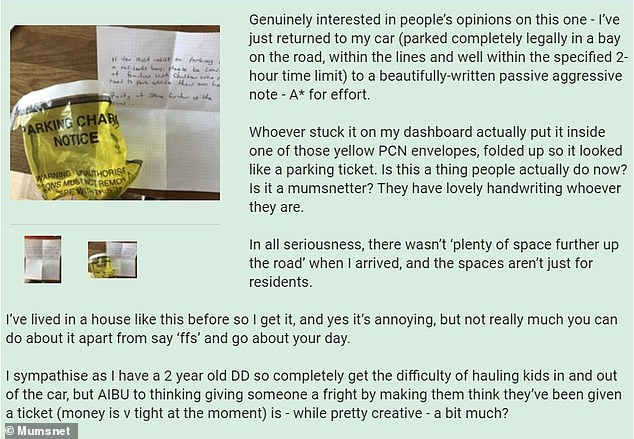 ‘I sympathise as I have a 2 year old DD so completely get the difficulty of hauling kids in and out of the car, but AIBU (am I being unreasonable) to thinking giving someone a fright by making them think they’ve been given a ticket (money is v tight at the moment) is – while pretty creative – a bit much?’

And people were quick to take to the comments section – with many agreeing she isn’t being unreasonable.

‘Absolutely a bit much. I hate people like this,’ wrote one, while a second penned: ‘If s/he’s got time to write aggro notes and put em in envelopes s/he sure as hell has got time to park up the road and walk with the kids.’

Meanwhile, others joked the note would give them all the more reason to continue to park there. 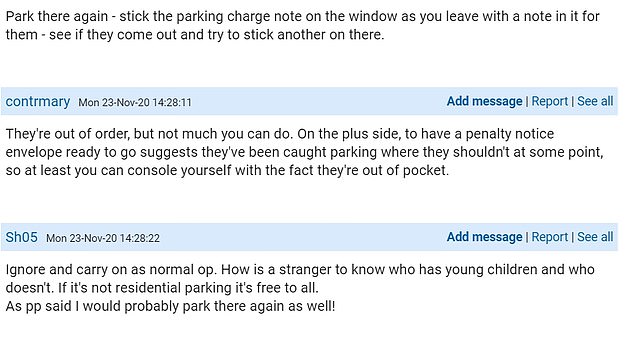 ‘Park there again,’ wrote one, while a second commented: ‘That note would make me want to park there every day for the next month.’

A third added: ‘I would move into my car and live in the parking space,’ while a fourth agreed: ‘Yup – that would have me parking there at the next opportunity.’

Elsewhere, another pointed out: ‘They’re out of order, but not much you can do.’

‘On the plus side, to have a penalty notice envelope ready to go suggests they’ve been caught parking where they shouldn’t at some point, so at least you can console yourself with the fact they’re out of pocket.’

Daily Echoedhttps://www.dailyechoed.com
Previous articleCoronavirus: Millions travel for Thanksgiving despite warnings
Next articleTooter is an ‘Indian’ Social Platform That Looks a Lot Like Twitter

How the Pandemic Broadened My Horizons as a Diner

How the Pandemic Broadened My Horizons as a Diner