For the House of Representatives’ vote on impeachment today, Nancy Pelosi pulled an old favorite out of her closet: the exact same dress she wore for President Trump‘s first impeachment vote in 2019.

The 80-year-old Speaker of the House was photographed on Capitol Hill in Washington, D.C. on Wednesday wearing a knee-length black sheath dress with three-quarter sleeves and a mandarin college, which she paired with a gold beaded necklace and a floral mask.

The dress and necklace were both immediately familiar to Americans who had closely watched Trump’s impeachment proceedings in December 2019, as Pelosi had dressed nearly identically for the historical occasion.

Impeachment dress: Nancy Pelosi was pictured at the Capitol today wearing a black dress with a beaded necklace 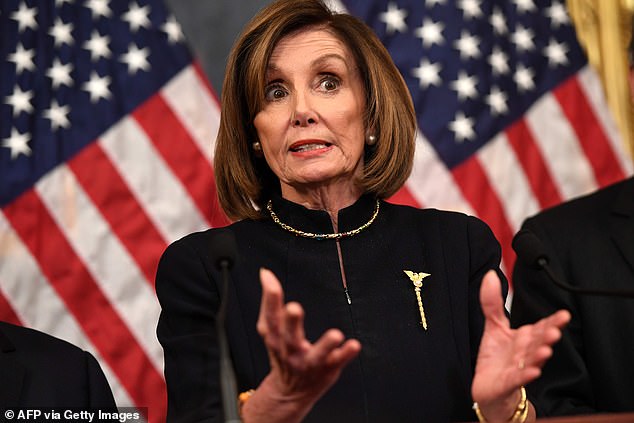 Flashback: She wore the same dress and necklace combo for Trump’s first impeachment in December 2019 (pictured)

Twitter users were quick to notice that she wore a somber black dress for the occasion.

Today: This time, she paired the dress with a floral mask

‘It’s her funeral dress,’ said another.

But other soon pointed out that she was re-wearing the dress she wore on December 18, 2019 for the first impeachment.

‘How embarrassing @SpeakerPelosi didn’t have time to get a second impeachment dress,’ joked another.

‘You know your presidency is in trouble when the Speaker has an “impeachment outfit” just for the occasion,’ said another.

One pointed out that her outfit ‘has been worn at half of all impeachments in US history.’

In addition to Trump’s two impeachments, former President Bill Clinton (in 1998) and Andrew Johnson (in 1868) were also impeached, once each. 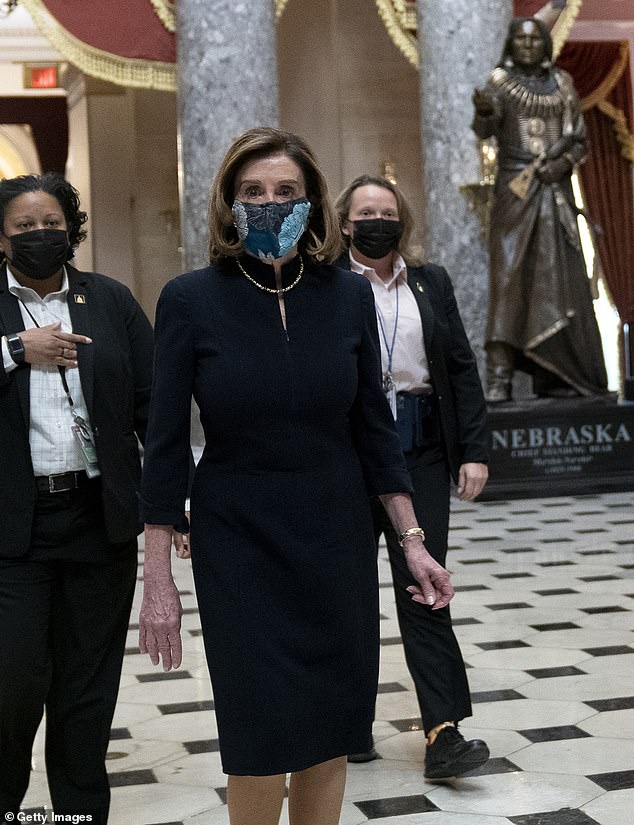 Somber occasion: She was among several Congresswomen to wear black for the first impeachment (pictured today) 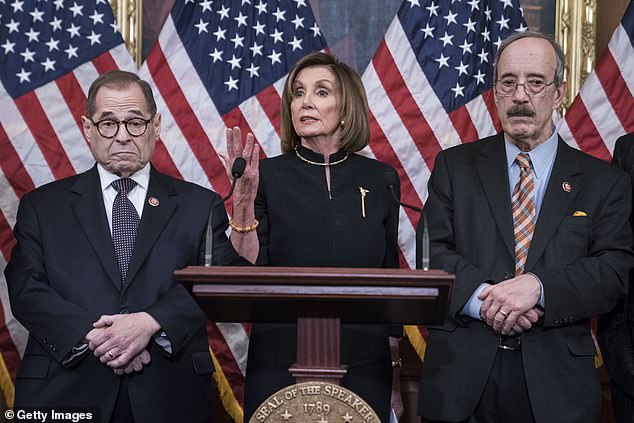 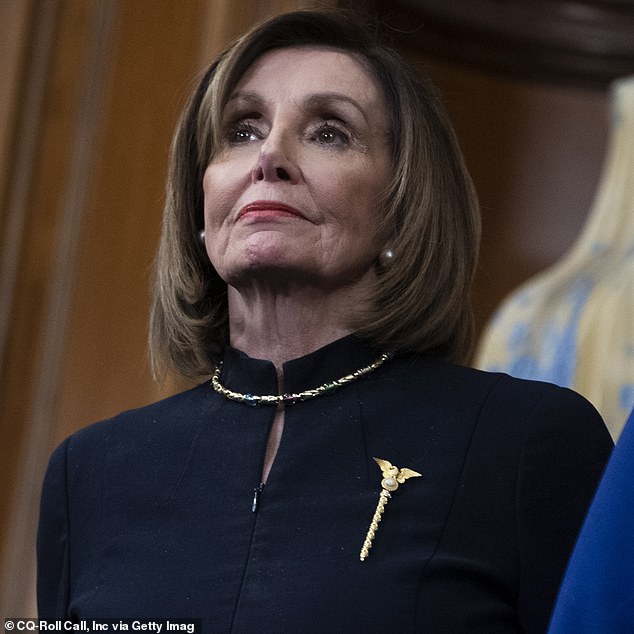 Back then: In 2019 (pictured), she also wore a Mace of the United States House of Representatives pin

Pelosi even accessorized the same on both occasions, topping the dress’ black collar with a gold necklace with colorful beads.

The only difference appears to be that she swapped the Mace of the United States House of Representatives pin — created by jewelry designer Ann Hand, for $125 — with a floral face mask this time around.

Much was made of the Speaker’s outfit in 2019, including the pin, which stands for strength and unity and is the symbol of authority of the Sergeant at Arms.

Pelosi was also one of several Democratic members of the House who wore black for the solemn occasion.

‘Normally we wear red [on Wednesdays] and we said, “We can’t do that today.” So, many of the women are in darker colors because it is a somber day,’ Rep. Debbie Dingell (D-Mich.) said, according to The Hill. 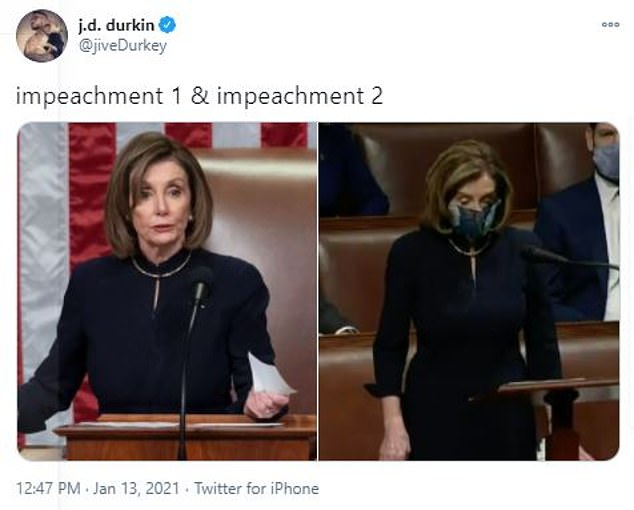 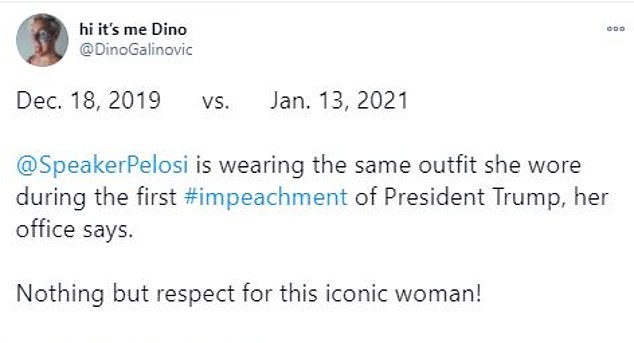 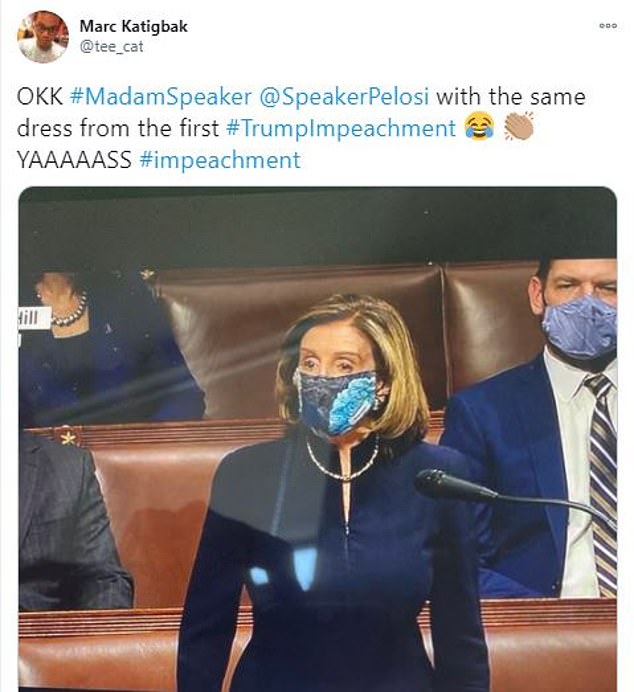 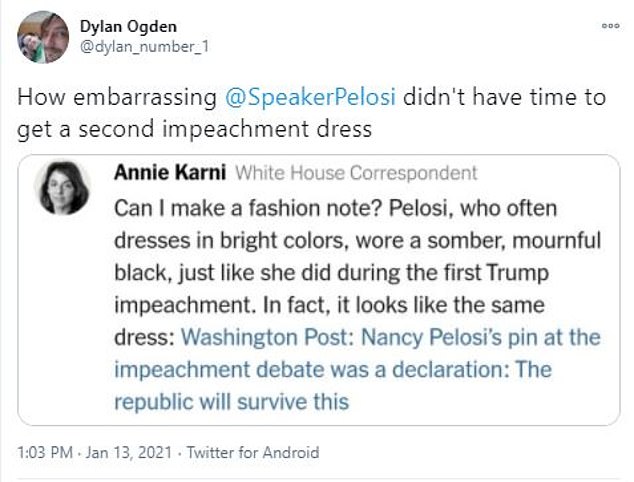 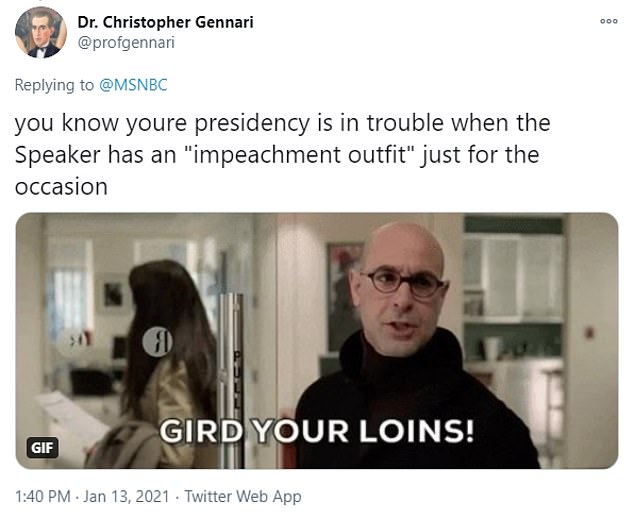 Reaction: Social media users were quick to notice the repeat wear and applaud it on Twitter

What happens next? Nancy Pelosi decides when to transmit Article to Senate. When she does, it must begin trial on the next sitting day and sit six days a week until it concludes

What happens next? If a trial is under way, it can continue. Most legal experts say if it has not begun, it can, but there is a minority who say impeachment cannot continue if the president is not in office

‘We know that the president of the United States incited this insurrection, this armed rebellion against our common country. He must go.

She called Trump ‘a clear and present danger to the nation we all love.’

‘The president much be impeached and, I believe, the president must be convicted by the Senate, a constitutional remedy that will ensure that the republic will be safe from this man who is so resolutely determined to tear down the things that we hold so dear,’ she said.

She also slammed those who engaged in the riot.

‘Those insurrectionists were not patriots. They were not part of a political base to be catered to and managed. They were domestic terrorists and justice must prevail,’ the House speaker said.

This is not the first time the Speaker has a had a viral fashion moment.

On December 11, 2018, the then-78-year-old California Representative and her colleague Chuck Schumer met with the president at the White House for a conversation meant to head off a government shut down.

While they couldn’t come to an agreement and the meeting grew quite contentious, one opinion was pretty unanimous on social media in the following days: Pelosi’s chic, high-collar winter coat from Max Mara’s 2013 collection was fabulous. 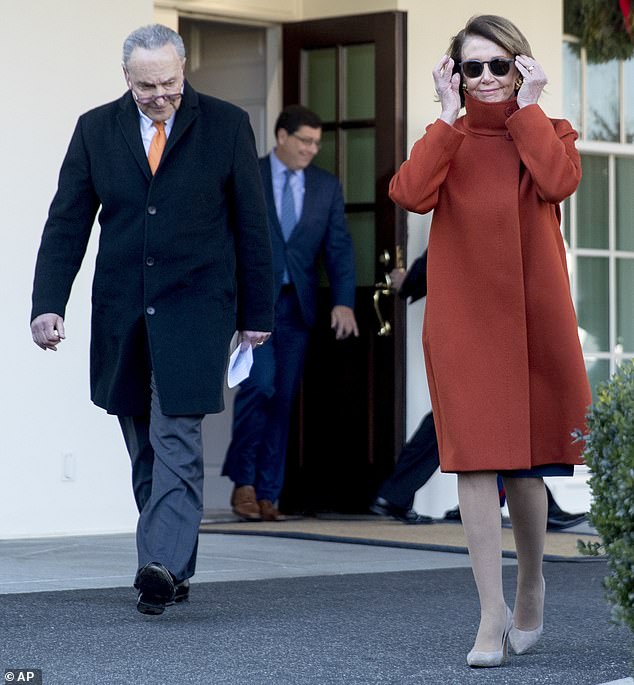 That coat: On December 11, 2018, the Speaker went viral for this bold Max Mara coat 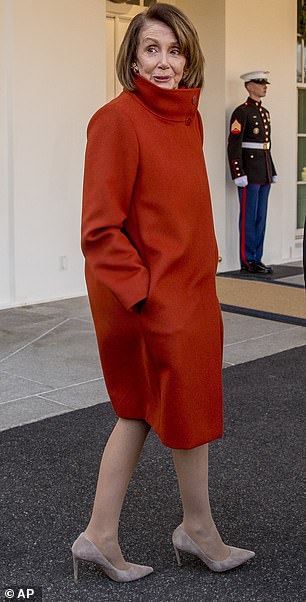 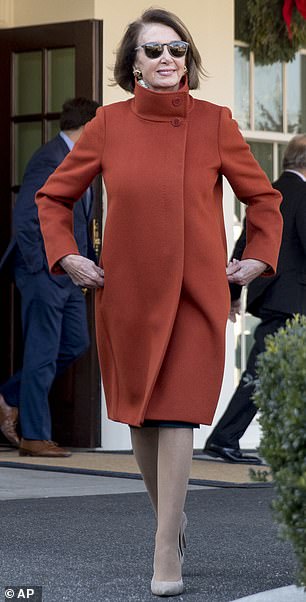 She’s had the coat for several years, having bought in it late 2012 on a shopping trip with her daughter, Christine. In January of 2013, she wore it to President Obama’s second inauguration.

After the December 2018 wearing, social media users called it ‘on point,’ ‘exceptionally stylish,’ and ‘very nice.’

The coat’s designer, Max Mara, noticed too: Though the outerwear was originally released in late 2012 and hadn’t been available to buy for some time, the brand re-released it in early 2019 due to the interest that Pelosi stirred up.

When asked by Elle.com if the coat was a ‘deliberate’ choice, Pelosi said no, and that she wasn’t trying to say anything with it.

‘No, contrary to what you might read,’ she replied. ‘It was cold and I needed a coat, so I went shopping in my closet.

‘I had no plan or intention; it was just clean. Clean should be the first criteria,’ she went on.

Daily Echoedhttps://www.dailyechoed.com
Previous articleKeurig-style ice cream machine promises to make soft serve in under two minutes
Next articleNews Analysis: Trump’s impeachment gave Republicans a chance to choose principle over party. Most did not

‘Do you change his diaper too?’ Woman is slammed for packing her tradie boyfriend’s lunch every day

'He's not your child!' Woman is blasted after proudly posting a...
Read more
Fashion

'My husband doesn't do 99 per cent of this!' Chore list...
Read more
Fashion

Covid crisis: ‘I’ve been excluded from any help’

How Russia began ‘grooming’ Donald Trump 40 years ago by saving him from financial ruin, book claims

Covid crisis: ‘I’ve been excluded from any help’

Inmate who escaped from Stony Mountain Institution back in custody: Manitoba...