Shia LaBeouf has been scrubbed out of promotional material for Netflix’s new movie, Pieces of a Woman, after his ex-girlfriend FKA Twigs filed a lawsuit last month accusing him of ‘relentless abuse’.

The under-fire actor, 34, plays a starring role in the film, which is due to launch on the streaming platform on January 7 and has been tipped for awards success.

Vanessa Kirby, who co-stars with LaBeouf in the movie, has already been reaping in the plaudits, having received the best actress prize at the Venice Film Festival, and is now expected to secure an Academy Award nomination, alongside Ellen Burstyn, who plays her mother.

BEFORE: Stills from the movie show Vanessa Kirby staring up at LaBeouf 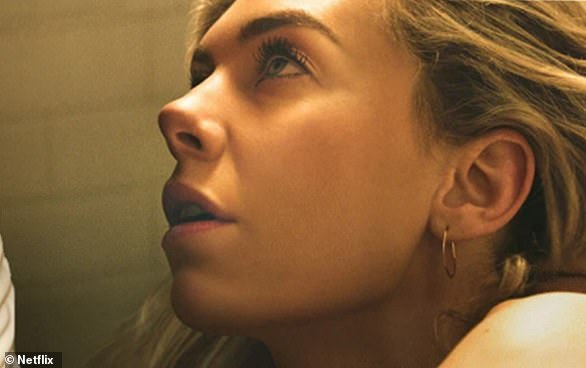 AFTER: For the thumbnail of Netflix’s trailer on YouTube and Twitter, Labeouf appears to have been omitted from the frame in favor of a close up

But LaBeouf, who was previously favored to land a best supporting actor Oscar nomination, was recently removed from the streaming giant’s summary of the movie on its website.

And now the star’s name and face appears to have been entirely erased from Netflix’s newest ads promoting the movie, Page Six reported.

One advertisement posted to Twitter by the Netflix Film account on December 22, but recently promoted, reads: ‘Vanessa Kirby and Ellen Burstyn star in Pieces of a Woman, a story about a mother’s love and loss. On Netflix January 7.’

While omitting LaBeouf’s name from the caption, the trailer also features no images of him and makes no mention of his role in the film.

The still frame for the trailer shows a close up of Kirby’s face, with white bathroom tiles in the backdrop with nobody else visible in shot.

Stills from the movie, however, show that the shot actually features Kirby staring up at LaBeouf, caressing his face, though he appears to have been cropped out in the new image.

Last month LaBeouf also had his name removed from Netflix’s ‘For your awards consideration’ page promoting the film. Kirby was put up for best actress consideration, but LaBeouf’s name was left off the list.

The description reads: ‘Martha (Vanessa Kirby) and Sean are a Boston couple on the verge of parenthood whose lives change irrevocably when a home birth ends in unimaginable tragedy.’

LaBeouf’s name was noticeably not included in parentheses next to that of his character Sean. 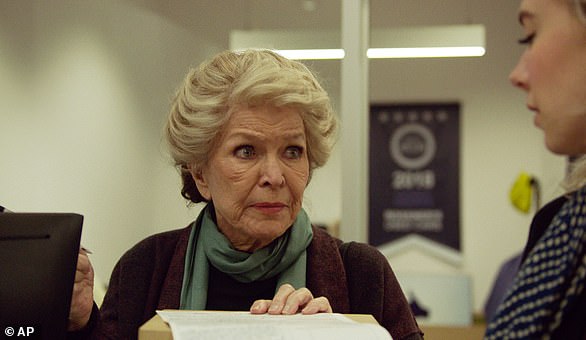 Ellen Burstyn, who plays Kirby’s mother in the film, has also been tipped for awards success

Netflix has not yet returned a DailyMail.com request for comment on the matter.

LaBeouf’s apparent omission from any promotional material for the movie follows shortly after artist FKA Twigs – real name Tahliah Debrett Barnett – filed a lawsuit against him in December, accusing him sexual battery, assault, and infliction of emotional distress.

In her lawsuit, Twigs alleges LaBeouf knowingly gave her an STD and abused her – both emotionally and physically – during their relationship.

The pair dated for less than a year before ending things in May 2019 with sources saying at the time the separation was down to her work schedule.

In response to his ex’s allegations, LaBeouf issued a statement to the New York Times that ‘many of these allegations are not true’, though conceded ‘I’m not in a position to tell anyone how my behavior made them feel.’

‘I have no excuses for my alcoholism or aggression, only rationalizations,’ he said. ‘I have been abusive to myself and everyone around me for years. I have a history of hurting the people closest to me. I’m ashamed of that history and am sorry to those I hurt. There is nothing else I can really say.’

With no public catwalk shows due to the Covid-19 pandemic, fashion houses have had to get creative this 'virtual' Paris Haute Couture Week...
Read more
Fashion

The Actual Difference Between A $20 And $200 Pair Of Sunglasses

Sunglasses are a much-loved accessory, but they also play an important role in promoting our eye health ― or they should, anyway. “Many...
Read more
Fashion

Culinary queen Martha Stewart just launched a new Line of CBD products for pets with Canopy Animal Health.'My dogs are not only my...
Read more
Fashion

Video games entered mainstream culture decades ago, but these days, gamers are more like celebrities, with millions of fans online. That means, among...
Read more

Constructivist Influences and Scandinavian Design Meet in This Moscow Flat