Naturalist Steve Backshall has predicted what the animals of the future might look like if nothing is done to tackle climate change.

The TV adventurer, 47, in collaboration with UK energy provider Bulb, explained how wildlife might be forced to adapt and evolve to cope with melting ice caps, warmer oceans and drier deserts.

Among them is a pink walrus that has become smaller with sharper tusks as it is forced to leave the bountiful hunting ground of the Arctic ice.

Elsewhere, puffins will lose their distinctive colouring in order to blend in against their new barren environment.

Naturalist Steve Backshall has predicted what the animals of the future might look like if nothing is done to tackle climate change. Pictured, a polar bear scavenges for food

Backshall predicts that by 2040 the Arctic will be ice-free for most of the year, meaning the bears will either starve to death or drown after swimming for days on end.

Those that make it onto land will scavenge from rubbish dumps and mate with Grizzly bears to create a hybrid Pizzly bear.

Explaining the prediction, Backshall said: ‘They’re a dirty grey/brown colour and have a bigger snout to accommodate the huge nasal cavities – these are used to sniff out garbage and whale carcasses in the now polluted air of the Arctic tundra.

‘A pure white morph pizzly is rare nowadays, and due to ‘hybrid vigour’, the new pizzly is bigger and stronger than its cousins. Males are covered in scars due to battles with other males at choice food sources.’ 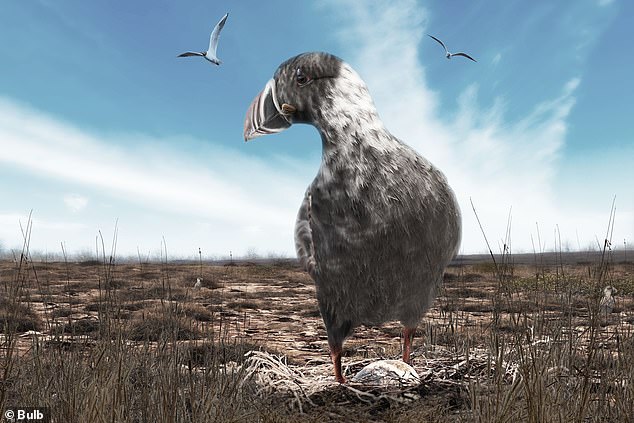 Puffins will also be affected. Backshall believes they will be forced to move to the Arctic to follow their natural prey as water temperatures rise

Meanwhile, puffins are also predicted to become a lot duller in order to survive.

With rising water temperatures, their natural prey, the san eel, is driven further north into the Arctic, where the puffins will follow.

However, unable to burrow underground in the tundra they are forced to nest on the ground where they would be easy prey for predators.

Backshall said: ‘A hundred years ago they used to develop a brightly coloured shield over the beak during mating season.

‘Now this too great an energy demand, and makes them obvious to predators like gulls and foxes, so they now have a plain dark beak and a mottled feather colouration.’

PINK WALRUSES THAT ARE SMALLER IN SIZE 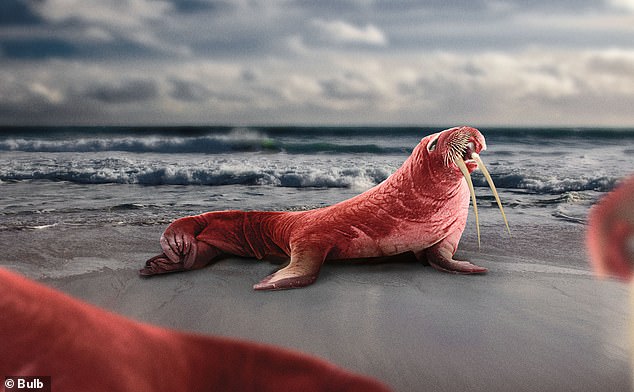 One of the most startling changes that Backshall predicts is the appearance of the walrus.

Rising water temperatures in the Arctic and no territory left to migrate to because of ice cap melting, their hide thins causing their perfused blood vessels to come closer to the surface.

This in turn causes their skin to turn a bright pink colour and because food will be harder to come by, they reduce in size.

‘The tusks originally had a function in drawing the animals out onto the ice (their scientific name means the tooth walking sea horse) but as there is no ice now,’ Backshall said.

‘The tusks are mostly used for defence against hungry pizzly bears, so are dagger sharp.’ 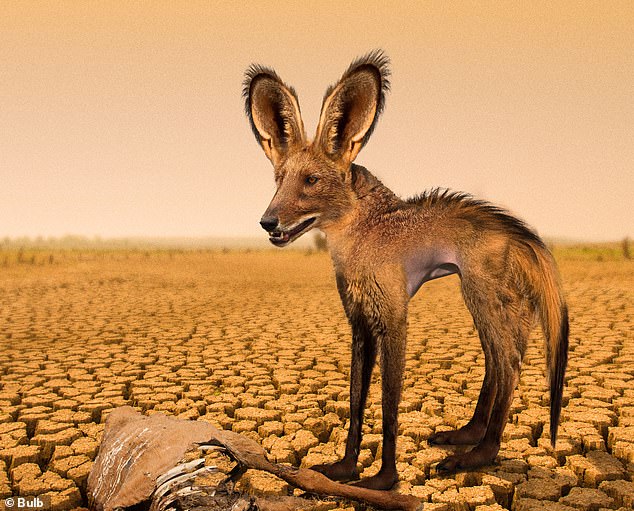 Bat-Eared Foxes will become smaller, with larger ears and legs in order to allow heat to escape more quickly. They will also evolve to eat larger prey than just termites

Elsewhere in the world, the bat-eared fox has undergone a dramatic change in size to survive in the new world.

Backshall predicts that with grassland turning into deserts because of the higher temperatures, foxes will begin to hunt more than termites and will have a stronger jaw to crunch through bones.

Their ears will become larger and their bodies smaller, with longer legs, all to increase the rate of heat loss.

Backshall said: ‘The feet are wider and broader to keep it ‘afloat’ on desert sands, and it’s developed long camel-like eyelashes to keep sand out of the eyes. The nose is now gigantic, as it condenses water vapour inside of it, and again uses it to lose heat.’ 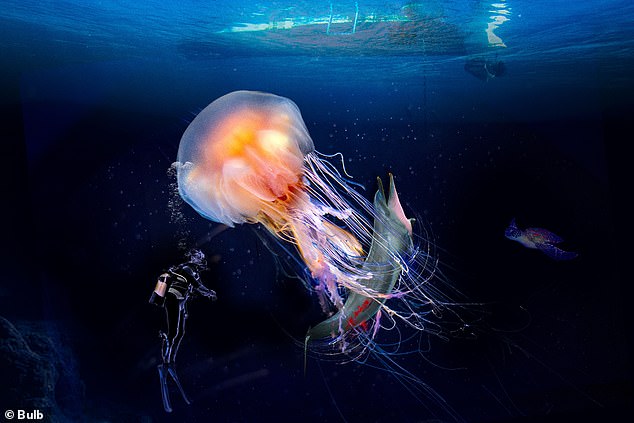 Jellyfish, such as the Lion’s Mane jellyfish, will benefit from climate change. Warmer waters and increased rainfall will attract more prey for them to eat

However, the changes aren’t bad for all animals, with Lion’s Mane jellyfish benefitting from the warmer waters.

They will increase in size and become more venomous to take on larger prey such as bottlenose dolphins which will appear more commonly.

While the illustrations are only predictions, Backshall is concerned that transformations like his could be seen within 100 years.

He said: ‘It’s down to all of us to do our bit to protect nature and the environment so that this doesn’t happen.’

Bulb’s Sustainability Lead Shaunagh Duncan said that the key to tackling climate change is cutting carbon emissions and that we all have to do our part.

‘At Bulb,’ she said ‘we’re committed to helping people reduce their carbon emissions and we’re confident that by making more sustainable choices, such as switching to 100% renewable electricity and carbon neutral gas, we’re able to save our wildlife, and our planet.”

Daily Echoedhttps://www.dailyechoed.com
Previous articleThe future of concerts? The Flaming Lips and fans rock out inside plastic bubbles during show
Next articleLindsey Graham wants a COVID bill but slams Pelosi for trying to ‘change election laws’

A woman who developed rosacea as a teenager has found relief from her redness in a concealer made with capers - which she claims...
Read more
Fashion

Husband and wife Sam and Melissa Griffiths set off in August 2019 to travel around Australia in a bus with their three young...
Read more
Fashion

Quiz: How well do YOU know your fast food?

PARIS/MADRID, Oct 23 (Reuters) - Europe faces a lengthy battle against the coronavirus at least until mid-2021, France warned on Friday, as anxious...
Read more

Joe Cole claims Manchester City will have been 'given a lift'...
Read more

image copyrightReutersimage captionThe dam will be the biggest hydro-electric project in AfricaEthiopia's prime minister has said his country "will not cave in to...
Read more

A woman who developed rosacea as a teenager has found relief from her redness in a concealer made with capers - which she claims...
Read more

Inside the Ryder Cup’s postponement

A weekend where the drive for individual glory gives way to a need to succeed for the team. Where suddenly any concern over...
Read more

Joe Cole claims Manchester City will have been ‘given a lift’...