The perfect bite: How this woman is demystifying Ethiopian food | CBC News

Mimi Sheriff owns Gursha, Newfoundland and Labrador’s first Ethiopian catering company, and is making some of the most flavourful food in the province.

Sheriff began her catering journey while organizing an Oxfam event. Its title was “Re-Imagining Africa.” Featuring Ethiopian food at this event was a priority, but it was a struggle to find anyone to cater.

“I learned that there was an untapped niche mark for Ethiopian food,” she said. “I wasn’t the only one craving the food, so I saw it as a great business opportunity.”

Demystifying Ethiopian food is a big job, but Mimi is up to the challenge.

“I want it to become a type of cuisine as common as curry or sushi, but there’s a lot that people don’t know,” she told me.

For example, Ethiopian food is traditionally communal and is eaten while shared.

“We eat with our hands, using the injera bread to scoop everything up. As a sign of hospitality and caring, we also occasionally feed each other. That mouthful of food is called a ‘gursha’ in Amharic.”

Sharing a gursha is a sign of emotional intimacy.

“I love gursha. It’s not uncommon for me to sit next to my mum and have her feed me gurshas until I’m full,” she said.

She’s offered gurshas to many people since moving to Newfoundland and Labrador.

“Some people accept them, others can’t quite get past the fact that I’m feeding them with my hands.”

Traditional dishes are Sheriff’s favourites and she makes all the hits.

Dora wat, which is a spicy chicken and egg dish, has an incredible depth of flavour. The flavour is intense; full-bodied, earthy, with a little tang reaching to the very back and roof of your mouth.

Watch: Mimi Sheriff talks about her love for Ethiopian food: 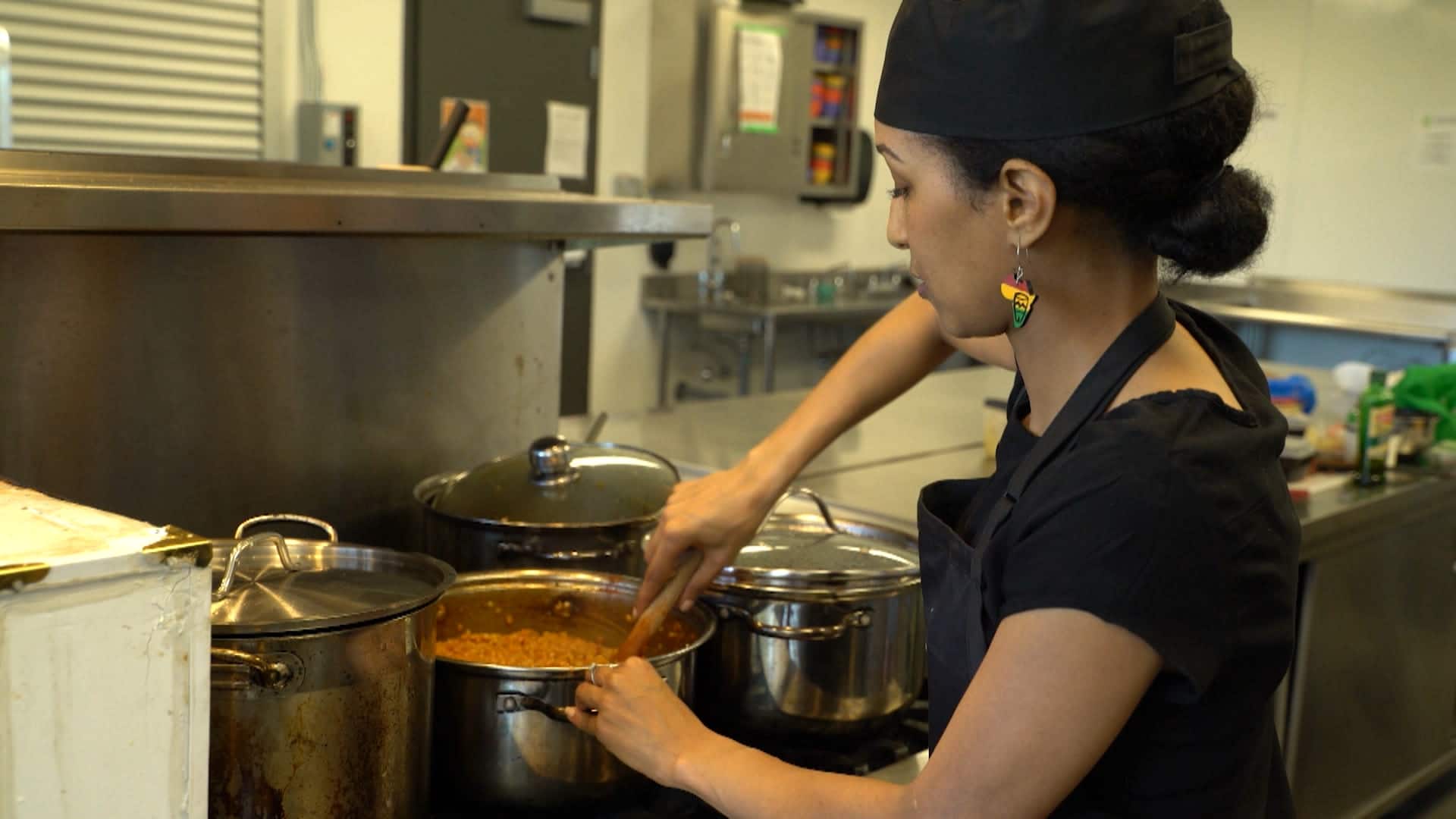 Mimi Sheriff, who operates Gursha at the St. John’s Farmers’ Market, talks about how she is bringing a taste of Ethiopia to the N.L. food scene 1:06

Miser wat, a spicy red lentil dish, somehow manages to be earthy, sour, and spicy all at once. All of these dishes are served atop the injera — a sour, fermented flatbread made from teff flour and dotted with tiny airholes that absorb sauces beautifully. Making the injera seems like a monumental kitchen project and Sheriff’s are from scratch.

“I threw out more injeras than I care to admit because I messed them up. I don’t know if there is a secret more than practise, patience and a mitad,” she said, referring to a special pan specifically designed for making inerjas.

“There are many one-day injera recipes that will do in a pinch, but to get the great injera you need to let the batter ferment for three or four days—it’s very similar to using a sourdough starter,” Sheriff said.

“You’ll know you’ve mastered injera when you see many ‘eye’ holes in your dough.”

Most of the dishes she serves contain garlic, ginger, kororema (Ethiopian cardamom), cumin, turmeric and besobla, type of basil.

Getting her hands on these spices in St. John’s can be a real challenge.

“It is difficult,” she said. “And I do order them from various places or, in a pinch, there are a few alternatives you could use, like dried Thai basil instead of the besobela, or dried oregano for koseret to spice the butter.”

A ‘dream cuisine’ for vegans

While the meaty lamb and beef curries are a draw for some, her food is actually often vegan-friendly.

Some of these dishes feature chickpeas and lentils, but others celebrate spinach, kale, beetroot, potato and cabbage.

“Ethiopian food is a dream cuisine for vegans—and by default, vegetarians— as it is common for Ethiopians to have vegan (fasting) meals more than 200 days a year for religious reasons,” she said.

Sheriff — a lawyer by profession who works in the technology sector — has had a lot of proud moments since opening her side business as a caterer, and really takes delight in feedback.

“I am truly motivated by every customer who tells me they look forward to coming to the market all week to have my food—is there a more satisfying and humbling feeling?” she said.

“My food is able to create a small bit of joy in someone’s life and be part of a new cultural experience for those who have never tried it before.”

Daily Echoedhttps://www.dailyechoed.com
Previous articleHow 8,400 gallons of Coke kept 007 on his motorbike in No Time To Die
Next articleGareth Bale ‘was the ONLY Real Madrid player to REJECT a pay-cut’

There are 13 new cases of COVID-19 as of Sunday with eight people in hospital, public health reports.  This represents a decrease...
Read more
Canada

Manitoba·NewWinnipeg police are investigating the city's latest homicide which took place early Sunday morning in the Daniel McIntyre neighbourhood.Police were called to a...
Read more
Canada

The London region saw one new death and 13 new cases of COVID-19 over the weekend as the provincial case count hit an all-time high.  ...
Read more
Canada

When these two sides played out a stalemate in August, the irate reaction suggested Rangers could be facing another season of the same...
Read more