Rep. Mikie Sherrill said Tuesday she saw lawmakers giving tours she perceived to be ‘a reconnaissance to groups Tuesday, January 5

A Democratic representative revealed Tuesday she witnessed members of Congress leading ‘reconnaissance’ tours through the Capitol the day before the mob stormed the building – as more details emerged over the attack indicating three Republican lawmakers may have helped protesters get inside.

Mikie Sherrill, who represents New Jersey‘s 11th district, said during a Facebook Live video Tuesday night that she wants members of Congress who ‘abetted’ President Donald Trump and the violent crowd who descended on the Capitol to be held accountable and prevented from running for office in the future.

‘We can’t have a democracy if members of Congress are actively helping the president overturn the elections results,’ Sherrill said of her colleagues she claims assisted Trump in inciting a crowd to storm the Capitol last Wednesday, January 6.

‘Not only do I intend to see that the president is removed and never runs for office again and doesn’t have access to classified material,’ she continued in her straight-to-camera remarks.

At the same time, new revelations are surfacing that a pro-Trump activist, Ali Alexander, claimed he was assisted by three GOP representatives to help organize the January 6 assault on the Capitol to disrupt the election certification.

Alexandria Ocasio-Cortez said in an Instagram Live video Tuesday night that she feared for her life during the riots, specifically expressing her concerns that some GOP lawmakers would give away her location to the mob. 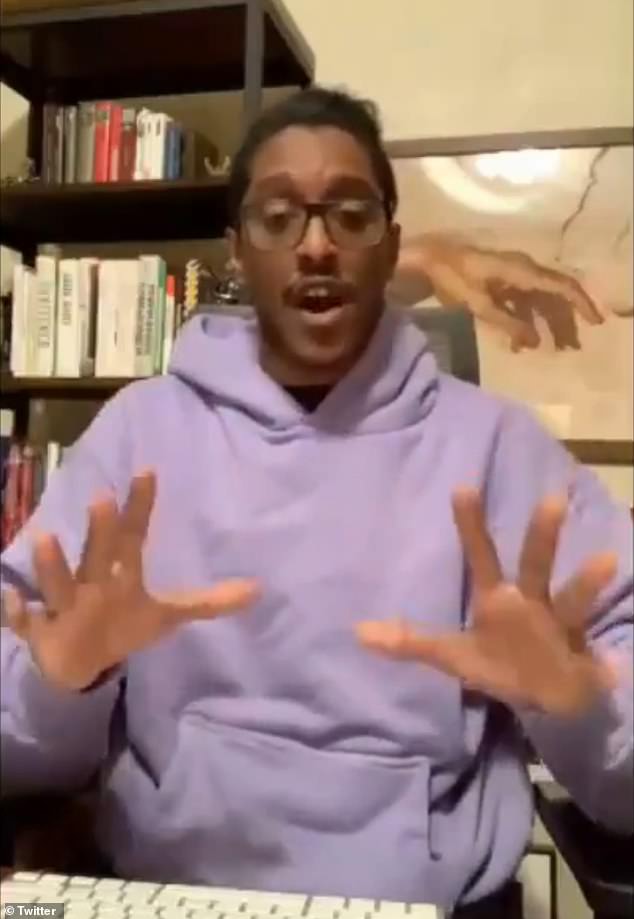 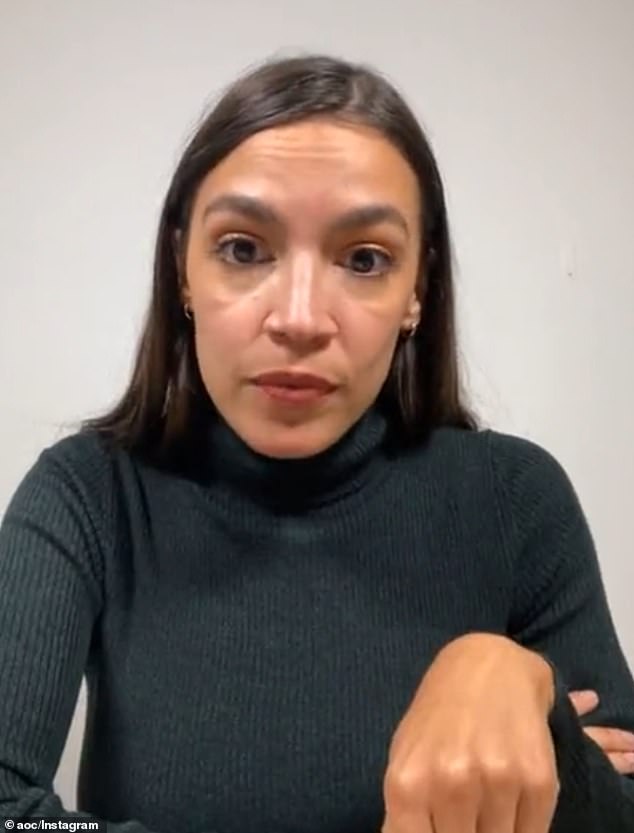 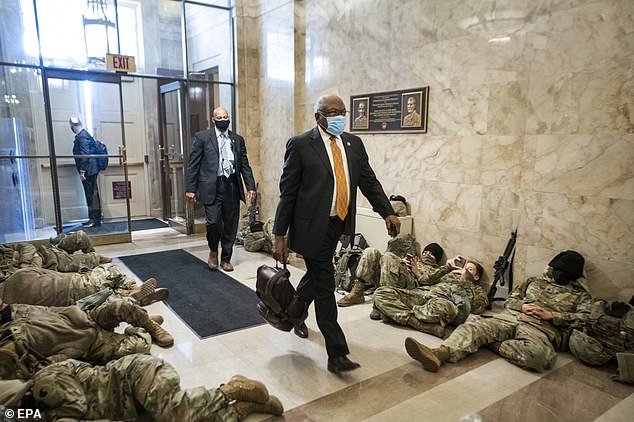 House Majority Whip Jim Clyburn walks past members of the National Guard Wednesday morning as they try to get some sleep inside the U.S. Capitol

‘I did not know if I was going to make it to the end of that day alive, and not just in a general sense but also in a very, very specific sense,’ the progressive lawmaker said during the hour-long live stream.

She called the close encounter ‘traumatizing’ and claimed her ‘near assassination’ is ‘not an exaggeration’.

‘There were QAnon and white supremacist sympathizers, and frankly white supremacist members of Congress, in that extraction point who I have felt would disclose my location and would create opportunities to allow me to be hurt, kidnapped, etc.,’ Ocasio-Cortez said.

She did not name any of the lawmakers she felt could have jeopardized her situation.

It is now known that Alexander told his followers on Periscope late last month that Republican Representatives Paul Gosar and Andy Biggs of Arizona and Representative Mo Brooks of Alabama were planning something big.

Alexander helped organize one of the demonstrations that converged on the Capitol lawn Wednesday – since then, his Facebook and Twitter accounts have been locked and he is banned from the social media platforms.

He said in a since-deleted video: ‘I want to let you guys know how we’re responding because I was the person who came up with the January 6 idea with Congressman Gosar, Congressman Mo Brooks and then Congressman Andy Biggs.’

‘We four schemed up of putting maximum pressure on Congress while they were voting so that who we couldn’t lobby, we could change the hearts and the minds of Republicans who were in that body hearing our loud roar from outside,’ Alexander detailed.

In the video to Periscope, he said the purpose of the rally was ‘to build momentum and pressure’ on the day Congress moved to certify the election for Joe Biden. He also vowed that his group ‘Stop the Steal’ would find rooms in the nation’s capital if hotels shut down in the midst of the unrest. 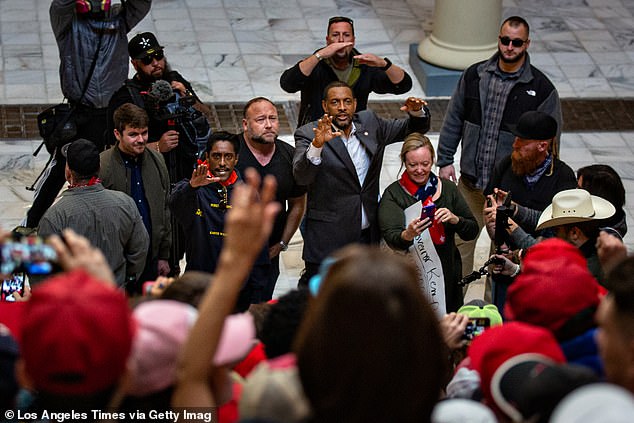 Alexander, pictured here with conspiracy theorist Alex Jones during a demonstration in Georgia in November, helped organize the ‘Stop the Steal’ protesters who gathered near the Capitol before the chaos broke out last Wednesday

Alexander did not specifically call for violence and instead claimed the left is ‘trying to push us to war.’

Biggs’ office sent out a statement claiming the congressman has not met or spoken with Alexander.

Biggs’ office responded to CNN, claiming he has not met or spoken with Alexander.

‘Congressman Biggs is not aware of hearing of or meeting Mr. Alexander at any point — let alone working with him to organize some part of a planned protest,’ the representative’s spokesperson said.

‘He did not have any contact with protestors or rioters, nor did he ever encourage or foster the rally or protests,’ they continued. ‘He was focused on his research and arguments to work within the confines of the law and established precedent to restore integrity to our elections, and to ensure that all Americans — regardless of party affiliation — can again have complete trust in our elections systems.’

Biggs, Gosar and Brooks all came under fire after going forward with objecting to the election results even after the violent Capitol riot forced them to evacuate the chamber and delayed proceedings for hours.

Sherrill, in her thirteen-and-a-half minute video posted to Facebook Tuesday, did not reveal which lawmakers she saw showing constituents around the Capitol last week – but she did make the shocking claim that the January 5 tours were part of some effort to get protesters familiar with the building before storming it the next day.

While some GOP lawmakers have come under fire for inciting the riots – whether directly or indirectly – or standing idly by as they unfolded, this is the most serious charge yet against sitting members of Congress regarding the unprecedented attack last week.

The six-hour riot resulted in hundreds of injuries and five deaths, including one Capitol Police officer and a female Trump supporter.

The House voted Tuesday evening on a non-binding resolution calling on Vice President Mike Pence to invoke the 25th Amendment to get Trump out of office now. The vote passed 223-205, with Sherrill voting in favor of it, even though Pence notified House Speaker Nancy Pelosi earlier Tuesday that he would not comply with the measure.

With the 25th Amendment off the table, and no hope of Trump resigning before his last seven days are up, House Democrats are likely to move forward Wednesday on impeaching the president for the second time.

Sherrill said in her video that she intends to support the effort.

She also voiced the sharp divide, which is widening in Congress, claiming those who do not agree with Democratic ideals of democracy are ‘now on different sides of this line.’

Joe Biden admonished his son Hunter and brothers Frank and Jim after they feared their scandals could harm the former vice president's shot...
Read more
US

Police outside Donald Trump's Mar-a-Lago club in Florida detained a man for questioning on Monday night after he was seen lingering outside the...
Read more
US

Ben Affleck and Ana de Armas' love is no longer after she reportedly pulled the plug on the relationship over the phone.And the...
Read more

Trump will unveil DOZENS of pardons on his last full day...

How Biden defended Hunter as he feared his scandals could ruin...