Visitors to Venice are being tracked via a new ‘control room’ that uses mobile phone data to log where they go, what they do, and where they’re from.

City officials sitting in the £2.7million nerve-centre, which opened in September, are able to see how many people are congregating in different parts of the city, how fast they are moving, where they stop, and what methods of transport they are using.

Despite the privacy concerns the new system raises, proud bureaucrats insist the anonymous data will only be used to control the flow of people through the city – which sees 30million tourists arrive each year among a population of just 50,000. 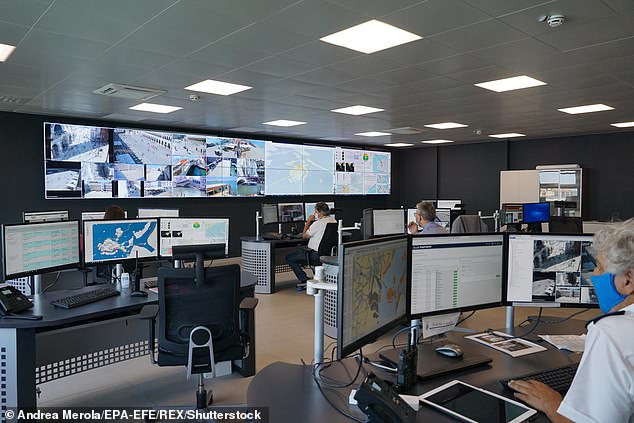 The city’s authorities are now able to track its 30 million visitors a year with its new €3million (£2.7million) state-of-the-art control room

‘This is the brain of the city,’ Marco Bettini, co-director general of Venis, the tech company which built the system, told CNN.

‘We know in real time how many people are in each part [of the city], and which countries they’re from.’

The development comes after a network of 34 sensors were installed in Venice in February last year which detect the silhouettes of anyone passing underneath and can identify whether they are children or adults.

The new system, which took three years to build, can also track the city’s traffic – and recognise the type of boat travelling on the Grand Canal and let residents and tourists know whether a water boat is late and by how many minutes. 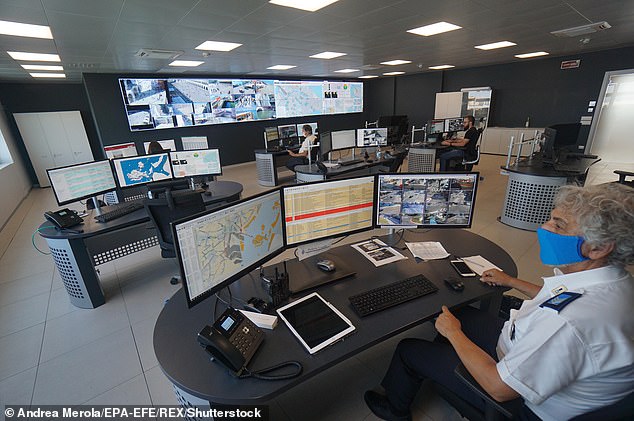 The Smart Control Room, fitted with screens with images and data coming live from Venice, is able to track the number of tourists in the city – but not only those standing in the vicinity of the many street cameras 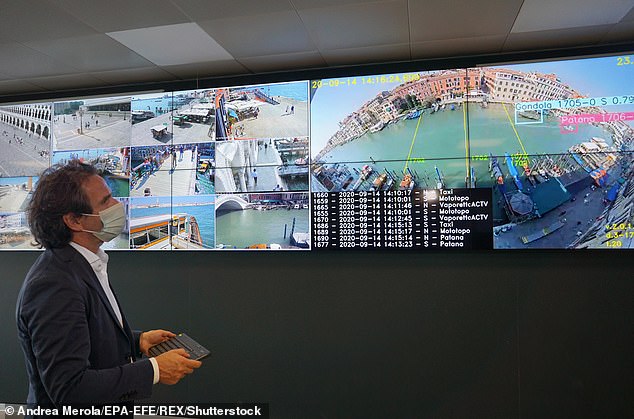 Now, authorities, in partnership with Telecom Italia, are able to track the city’s visitors while finding out their location in Venice, who they are and which country or region they are from

Eventually, the hope is that the system will lead to more sustainable tourism as authorities will be able to activate the city’s turnstiles at peak times to make sure residents are not held up by the estimated 60,000 tourists who visit per day.

Authorities will also be able to divert tourists from busy areas in advance, so as not to block other pedestrians.

They will also be able to start charging entrance fees on the days they are finding to be the most busy.

‘In 2021, Venice celebrates its 1,600th anniversary,’ said Mr Bettini. ‘And we’ll be celebrating with technology.’

The control room, which opened in September last year on Tronchetto Island, Venice, analyses the phone data of those walking through Venice’s streets to find out where they are from – but authorities say no personal details are released during the process.

Italians visiting the city are logged by the region they live in while the system finds out where foreign tourists are from by locating where their mobile phone is registered. 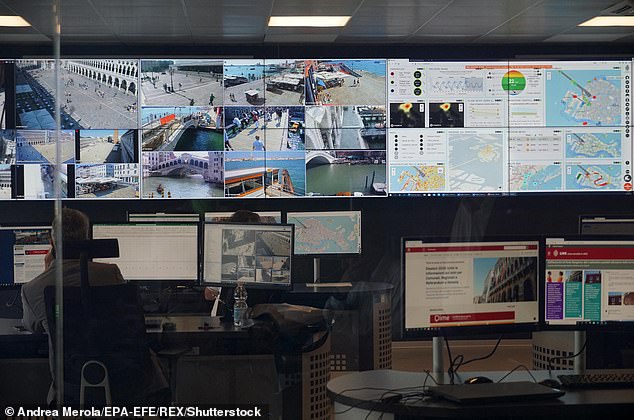 Eventually, the hope is that the system will lead to more sustainable tourism as authorities will be able to activate the city’s turnstiles at peak times to make sure residents are not held up by the estimated 60,000 tourists who visit per day. 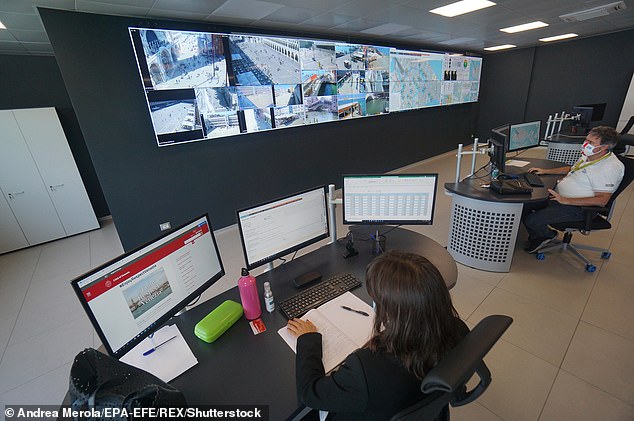 The control room, which opened in September last year, analyses the phone data of those walking through Venice’s streets to find out where they are from – but authorities say no personal details are released during the process

Graphics pop up in the Smart Control Room which show which areas of the city are facing overcrowding – and the software is able to track how quickly people are moving in tourist hotspots such as St Mark’s square.

A CNN reporter who visited the control room observed the system, which found 13,628 people had entered the city while 8,548 had left, with the peak time for arrivals being 10am – most likely tourists, reports the American news site.

Meanwhile, 36 per cent of foreign tourists are German and 16 per cent were from Switzerland.

‘The problem is not that Venice has too many visitors,’ said Valerie Duflot, co-founder of Venezia Autentica, a business focusing on sustainable tourism. ‘The problem is that all the visitors go to the same two places: St Mark’s Square and the Rialto Bridge.’

The news comes after the city installed 34 sensors in February last year which detect the silhouettes of those passing nearby.

The system has made it possible to intercept the data of telephones to know where people have come from and how long they stay in the city. The local council said at the time it would be done ‘in absolute respect for privacy’.

The 34 sensors were installed as part of an experiment which coincided with the city’s Carnival which began on February 8th 2020 and continued until the 25th. 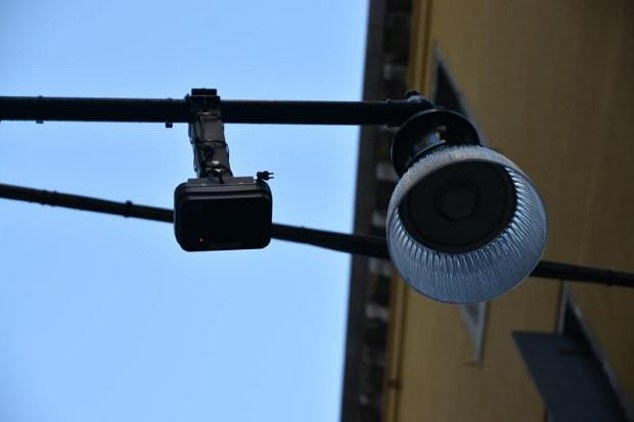 One of the 34 sensors installed in Venice (pictured). They will access mobile phones data to record where someone has travelled to the city from and how long they have been there

Tourism councillor Paoloa Mar said at the time it had become imperative to monitor the flow of visitors to Venice which has been worried for some time about saturation at certain times and locations. The floating city attracts around 60,000 tourists a day.

‘The system will use a mix of sensors, cameras and wifi to constantly monitor the situation with a data release every 25 hundredths of a second,’ he said.

‘The information is processed in the smart control room by dedicated software, which can then return information on the density of people present at a specific moment and their speed of movement.

‘In this way, we can predict at what time pedestrians will arrive at a certain critical point and divert them to another area in advance, so as not to clog or block pedestrian traffic.

‘Preventing everyone from following the same path has a double advantage: it allows better management of flows but also the discovery of unknown streets.’

The 34 latest generation sensors, which in the future will also be able to detect the level of pollution, have been installed in sites that fall along the main pedestrian transit routes, such as the historic bridges that span the canals, museums and plazas. 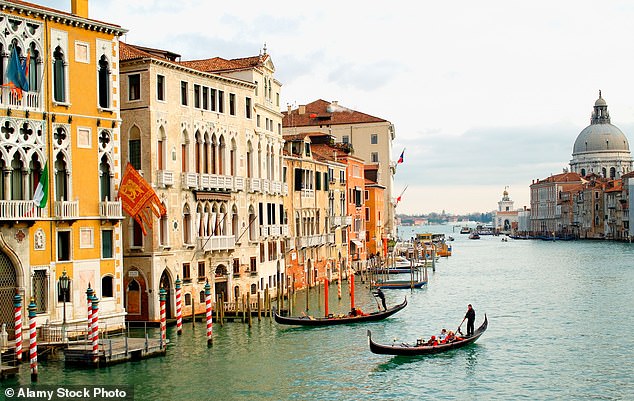 It hasn’t been specified how visitors will be deterred from visiting congested sites although the information will be shared on the social network sites.

Venice council said such a system has never been tested before in a city.

The authority is stressing that the sensors only detect the silhouettes of people, without identifying them. They do measure their height, the speed of movement and the density.

‘In this way, we will be able to know in real time which are the most crowded areas, anticipating any congestion,’ said a spokesman at the time

‘The project will also make it possible to intercept the data of the telephone cells and to know the origin of the people, in absolute respect for privacy.

‘In the analysis phase, therefore, we will have the opportunity to understand where visitors come from and how long they stop in the city.’

Rudy Giuliani has said he will not be on Donald Trump's legal team for the upcoming Senate impeachment trial - a day after claiming he...
Read more
US

COVID-19 hospitalizations across the United States reached their lowest point since January 2 on Sunday with a state-by-state breakdown showing a drop in...
Read more
US

The incoming director of the Centers for Disease Control and Prevention has warned that at least one new strain of COVID-19 has shown...
Read more
US

Samsung Chief Will Return to Prison for Bribery